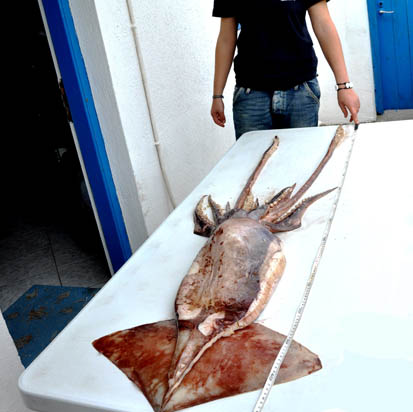 Two unusually large squids from the species of Ommastrephes bartramii were recorded on two consecutive days on the islands of Samos and Lipsi, in the eastern Aegean Sea. This species, commonly found in the Pacific Ocean, is a rare occurrence in the Mediterranean and particularly rare in the Aegean.

On the 8th of March, in the north part of Samos island (near ‘Kokkari’ beach), a squid 1,63m long and weighing 9 kilos(!) was found dead in the water by members of the Samos Divers Association. This was one of the largest females of this species that has ever been recorded! Without delay, the Samos’ Divers Association notified Archipelagos’ researchers who immediately went to retrieve the animal and identify it. According to all indications the cause of death of this squid was natural.

Α squid of the same species was caught the day before in a fisherman’s gill net near the port of Lipsi. A local fisherman, who is also a member of the observational network of Archipelagos in the Dodecanese region, notified Archipelagos of his catch and sent us the specimen. Due to the fact that this squid had been partly eaten by a moray eel, only the tentacles were left intact. This was not enough to identify the sex and other characteristics, such as size and weight, of the animal, but it was enough to identify the species.

This species, known as the neon flying squid, was reported for the first time in the Mediterranean Sea in 1976, but reports have become increasingly frequent since 2007. Before this report, it had only previously been recorded 16 times in the Aegean Sea. Although the squid Ommastrephes bartramii lives in deep waters (200-250m depth) making it a difficult species to study, these incidents corroborate the theory of distribution expansion of the species into the northeast Mediterranean.

Archipelagos researchers contacted experts from the Hellenic Centre of Marine Research, who helped with the identification of these squids, and offered valuable information about thespecies .

These two events that took place with only a day between each other once again point out how little we know about the biodiversity of the Aegean Sea, and especially about the organisms that live in the deep waters of the sea canyons surrounding many of the islands. Such discoveries enable scientists and the public to further their understanding of the biodiversity of our seas, which is increasingly threatened by human activities, mismanagement, and a lack of knowledge.The network that Archipelagos has created over the past twelve years, between island and coastal communities, fishermen, and the general public,encourages them to report and record such observations. Without the active participation of the public, it would be impossible to bring to light such occurrences in the vast Greek coastline, which exceeds 18,000km.

The large squid specimen will soon be transferred to an exhibition centre currently being set up in the ‘Maniakio’ building on Samos. This building houses Archipelagos’ Headquarters, and a Study Centre that has been created through a collaboration between Archipelagos Institute and the University of the Aegean. Many exhibitions of marine and terrestrial species of the Aegean sea and islands obtained by Archipelago’s research team will soon follow. 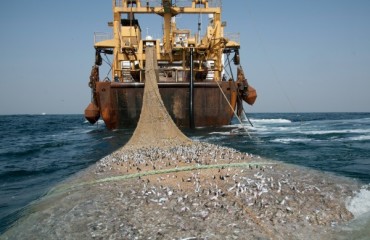 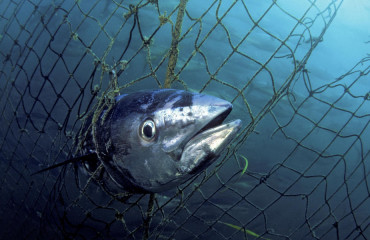 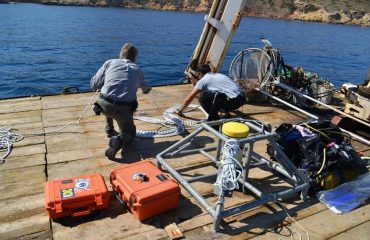 Cooperation with the University of Kiel