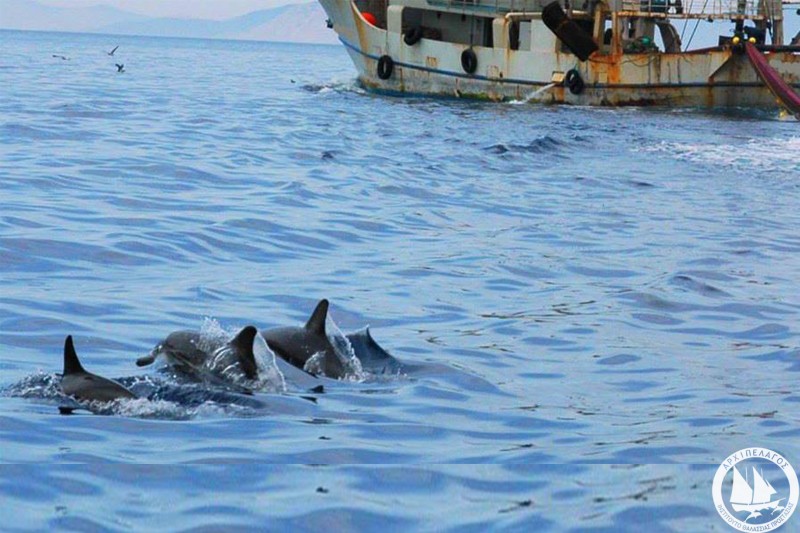 Recently, three dolphins were stranded on the shores of Skopelos and they are just some of the dozens that have been stranded so far this year, in various regions of the Aegean and Attica.

All three animals showed obvious cuts from a knife in the same parts of their body. One of them also had a rope looped around the tail, which was most likely used to get it up with a crane in order to be thrown back to sea after his murder. It should be noted that the only fishing vessels able to bear loads and cranes are those of bottom trawlers. It has become clear that of the bottom trawlers apart from the devastation they cause in the Greek seas through their overintensive fishing practices, they are also are engaged in a systematic killing of the dolphins that interact with their fishing gear.

Through our research on the interactions between marine mammals and the various types of fishing gears, we are recording a worrying behavioural change, as certain populations of certain dolphin species are frequently following the huge net dragged by the trawlers. In this way they try to feed, either from the marine animals revealed by the mingling of the seabed, or by the vessel’s discards.

Based on research published by Archipelagos Institute, this behaviour, particularly with regard to the species of common dolphins (Delphinus delphis), is something that started being observed over the last few years, which is related to the intense overfishing, which has resulted in the dolphins inability to locate adequate amounts of prey to feed on.