Over 90% of Greek agricultural plants are either extinct or on the verge of extinction.

This continued, systematic disappearance of local plant varieties will soon lead to a point where the choice between genetically modified crops and their unmodified versions will be a luxury.

In order to avoid relying on genetically modified crops only, we must recognize the importance of preserving local, endemic and unmodified agricultural plants. 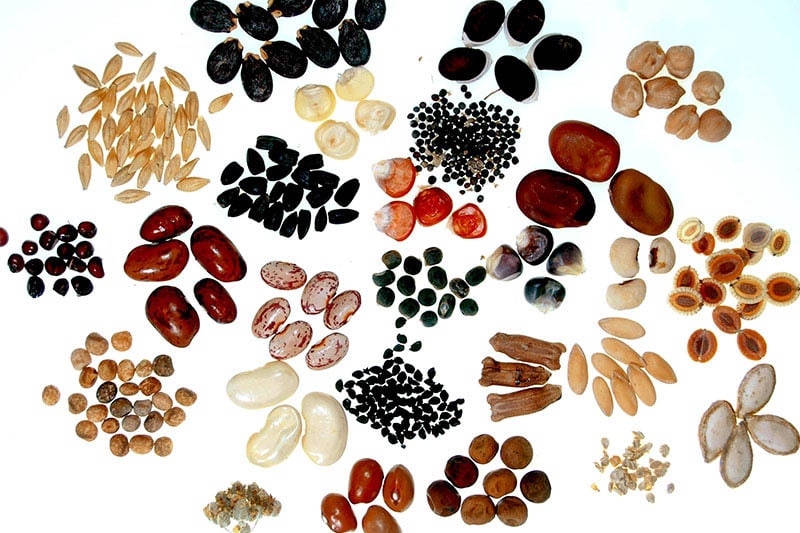 Geographical isolation of the Greek islands has enabled the development of a large number of distinct local varieties, which can be cultivated at high productivity levels with limited access to water and nutrient supplies.

While the evolution of these local plant varieties took centuries, in the last few decades we have seen them disappearing at an alarming rate, both in Greece and all around the world. The number of wheat species cultivated in Greece has decreased from 200 to only 20 varieties, marking a 90% decrease.

Recent research has also shown that only 2-3% of vegetable varieties which existed in Greece 50 years ago, are still being cultivated today. 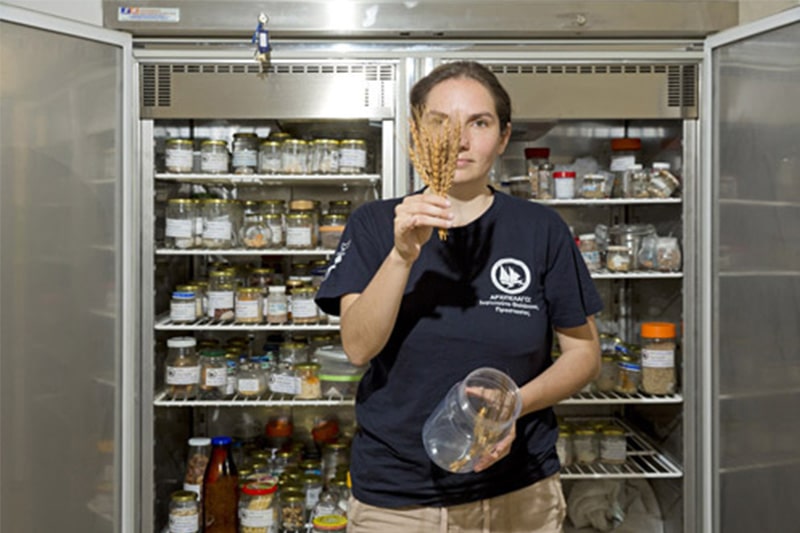 A modern ark for the protection of Greek phytogenetic material.

In response to this problem Archipelagos, in the spring of 2005, created the Aegean Seed Bank in 2005, which was initially set up on our research base on Ikaria island. Today it is housed in Samos, in the Maniakio building which is provided for mutual use by the University of the Aegean. Its goal is to collect and preserve for the long term, as well as to promote and encourage, cultivation of local varieties of agricultural plants, mainly from the Aegean islands. At the same time, seeds from endemic, protected and other species of island flora are being collected and preserved. The need for the creation of the Aegean Seed Bank was immense. During the past years, in our research and conservation actions in the Aegean, we unfortunately have been observing the disappearance of local varieties year by year, even on the most distant and isolated islands of the Aegean.

In just a few years of operation, the Aegean Seed Bank has managed to collect seeds from a large number of varieties from the Greek islands and different regions in Greece. It operates in collaboration with the Seed Bank of Greece of the National Agricultural Research Foundation as well as with NGOs and organizations active in this field in various parts of the Mediterranean.

With overwhelming support and contributions from local communities, Archipelagos has collected hundreds of varieties of local plant species from islands, islets and coastal regions of the Aegean as well as from parts of mainland Greece. These include local varieties of trees, vegetables, cereals, legumes, vines and herbs. The Aegean Seed Bank has also managed to collect many varieties which were considered to have already disappeared, such as the ‘red’ Cretan potato, species of white and red corn, and the ‘melathi’ onion.

Work of the Aegean Seed Bank 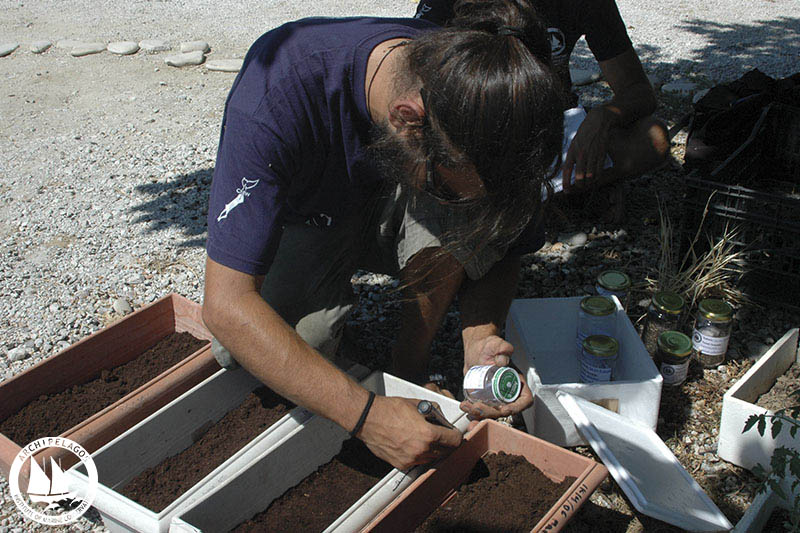 Throughout the year, Archipelagos’ researchers approach distant parts of the Greek seas on an ongoing effort to discover and collect seeds from local, traditional and endemic varieties. The collection process often brings us door-to-door in local communities, as locals and elderly persons in villages are often the people most knowledgeable of seed locations. They are also often the ones in possession of the important seeds.

In order to ensure preservation of Greek phytogenic material, it is also necessary to reproduce at the Aegean Seed Bank the preserved varieties. These reproduced seeds are distributed to responsible and aware farmers, so as to ensure continual cultivation of irreplaceable varieties, which have for centuries been supporting the food and nutritional needs of agricultural communities throughout Greece. The participating farmers collaborate with Archipelagos’ scientists in order to ensure that such cultivations are under safe conditions and protected from the dangers of contamination by foreign varieties. The farmers, in effect, propagate the local varieties with traditional-organic practices, free from the use of chemical pesticides and fertilizers.

Alongside these efforts, Archipelagos informs and raises awareness among island communities for the need to correctly preserve local varieties of agricultural plants, including information on farming methods that can help eradicate the dangers of contamination or the need for chemical additives and fertilizers.

How the local varieties are wiped out 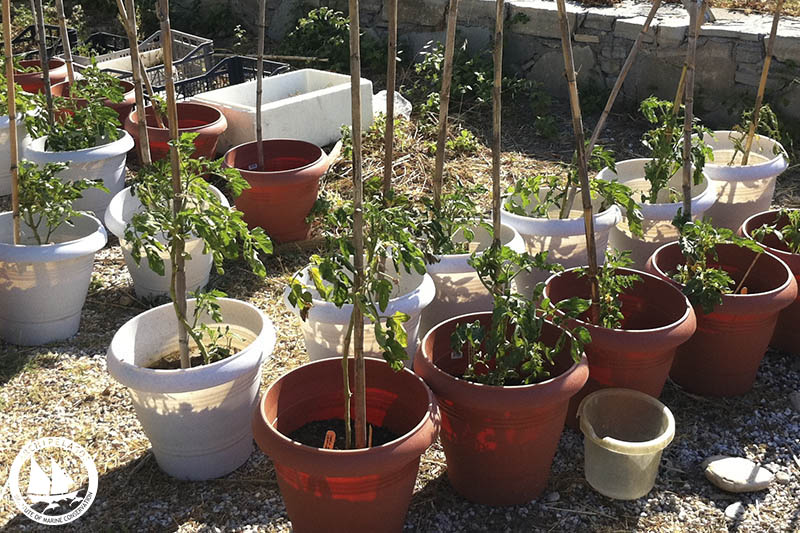 Until the middle of last century, farmers from islands and other parts of Greece cultivated almost exclusively local varieties. Every year the seeds from these varieties were preserved for next year’s crops. During the past few decades, however, an increasing number of professional and subsistence farmers have started buying commercially produced seeds. The seeds available in the market are frequently non-local varieties and hybrids.

Hybrid seeds have undergone a number of artificial, laboratory cross fertilizations. As a result they have a large yield during the first year of their cultivation, but only under certain prerequisites. They need to be supplied with large quantities of water and nutrients, often with chemical or organic fertilizers. Due to their high susceptibility to local pathogens they need to protected with the use of chemical or organic pesticides.

The artificial fertilization of hybrid seeds, apart from giving a high yield in their first year, gives them another characteristic: the seeds are weakened after the first cultivation and if they are cultivated in the second year, they give a much smaller yield. Therefore, the farmer is now obliged to buy, every year, a necessary amount of seeds so as to maintain his consistent, desired levels of crop production.

The greater danger, however, with hybrid seeds, is that during their fertilization process (from insects or the air), local varieties that are situated as far as over two kilometres away can be inadvertently contaminated. When a local variety becomes contaminated, the seed that is produced will acquire characteristics of the hybrid variety and will be less able to produce productive seeds. Therefore, such local varieties, which needed centuries to evolve, can disappear in only one crop season. In this way local varieties, which many farmers are trying to preserve and cultivate, can get destroyed without the farmers even realizing it.

It should be emphasized that contamination can only occur between plants of the same species, and only between those that flower during the same period. 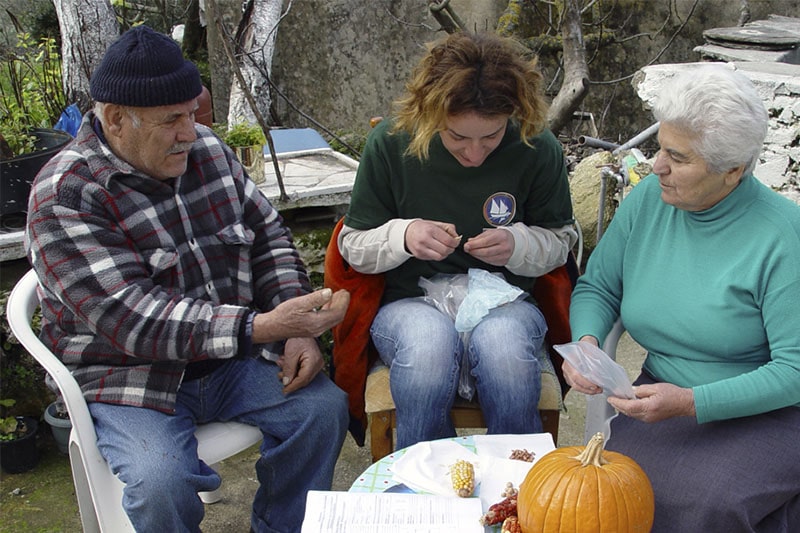 What action can we take to preserve local plant varieties?

This situation must be dealt with both at the individual and community levels. The farmers of a village or an island can make a united effort to stop the import of hybrid seeds or seedlings into their region. On a local level, local farmers associations, merchants of agricultural products and agronomists can also unite to stop importing hybrid seeds. But often, these organisations or individuals are the ones trading in hybrid varieties, rather than advising against their use.

We have to emphasize, that even among seeds which are supplied in the market with certifications that they are non-hybrids, occasionally found (by accident?) hybrid seeds. Therefore, the solution to maintain pure local varieties is to return to the practices that have been applied for centuries, until just a few decades ago, as well as the collection, correct preservation and proper exchange of local varieties of seeds.

Immediate action must be taken, as we find ourselves completely unprepared for a situation where a few companies will have total control of the world’s dietary sources. As Nikos Stauropoulos, former director of the Seed Bank of Greece, National Agricultural Research Foundation (NAGREF), stated, “He who controls the plants’ genetic material, controls the future nutrition of the world”.

How can you contribute to the efforts of the Aegean Seed Bank?

Collect seeds which you believe originate from local varieties of plants and send them to the Aegean Seed Bank for analysis and long-term preservation. Seeds which have to be collected include:

When preparing to send us seed samples, it is important to fill the collection form for every variety, describing all information known about it. Afterwards the seeds should be packed in numbered paper bags. When possible, please also send photographs of the plants or crops from which the seeds originate.

For every variety you send us you will receive a certificate stating that the seeds are kept in the Aegean Seed Bank, registered under your name. If the analysis shows that the seeds belong to a local variety and have not been contaminated, they will be stored for long-term preservation and seed propagation. Seed donors and their families will be given the priority to receive seeds of the varieties that they have donated, as well as of other varieties if they are available and adequate.