The islands of the Aegean are home to a rich biodiversity of flora and fauna, yet our knowledge of these is still limited. It is estimated that Samos and Ikaria have over 1,500 flora species because of the multitude of microclimates existing on the islands. Samos has a very rich environment, with a great assortment of plants that cannot be found on any other Aegean island. Despite forest fires occurring over the last few years, the forested land is expanding due to the plenitude of abandoned farmland that has quickly turned into forest and the island’s great reforestation rate.

The location and the unique environment of Samos, created by the mountains and the sea, allow many remarkable species to grow spontaneously, of which the most spectacular are orchids. A wide variety of orchids can be found on the island, including the Roman orchid (Dactylorhiza romana), horseshoe orchid (Ophrys ferrum-equinum), long-lipped serapias (Serapias vomeracea), Anatolian orchid (Orchis anatolica), and many others.

Besides the orchids, a wide variety of trees and shrubs cover the island, many of them evergreen. The main species of these ecosystems are the kermes oak (Quercus coccifera), the mastic tree (Pistacia lentiscus), the wild olive tree (Olea oleaster), the carob tree (Ceratonia siliqua), The Phoenician juniper (Juniperus phoeniceae), the east Mediterranean pine (Pinus brutia), the Aleppo pine (Pinus halepensis), the spiny broom (Calicotome villosa), the caperbush (Capparis spinosa), and many others.

The biggest forests of Samos are located on the Ampelos mountain, with smaller ones found on the Kerkis mountain. These forests mainly consist of gymnosperms, like Pinus brutia at the lower altitudes, or the black pine which dominates the upper forest, over 700 m of altitude.

Wherever the soil is moist, hydrophylous species grow. The most frequent on Samos are the Oriental plane (Platanus orientalis), the daphne (Laurus nobilis) and the willow (Salix cinerea).

Samos is one of the greenest islands of Greece, with particularly fertile soil for agricultural activities. Because of its rich soil and mild climate, the local plains and valleys are mostly covered with olive groves and vineyards. Vast orange production of the Merlin variety is also present, mainly in the area of Myloi. Part of the production is exported to the islands nearby.

Fruit bearing trees can be found throughout the island, especially in the northern part and on the mountains, where cherries and apple trees grow with no systematic cultivations. 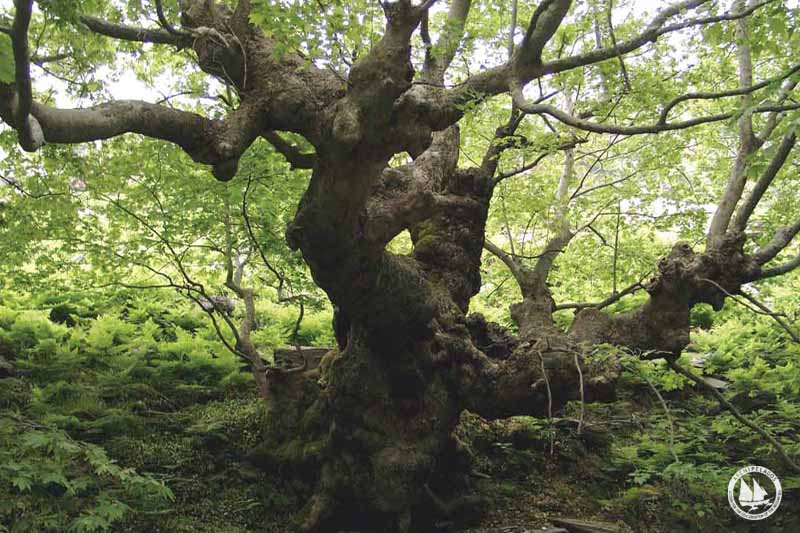 The Ranti Forest lies at the western edge of the Athera mountain chain of central Ikaria Island and covers an area of approximately 1,600 hectares (16km2). The area demonstrates a dynamic variation in altitude ranging from 200m to 800m above sea level, with steep ravines and precipices carved out by seasonal rivers. The forest has a legacy spanning over two centuries, with some of the oldest trees exceeding 300 years. Along with characteristic Mediterranean habitats, a unique Quercus ilex (Holm oak) habitat can be found. The history of Ranti is intriguing with many dry stone walls and shelters scattered throughout the landscape,preserving its ancient history.

At the end of the last ice age (10,000 years previous), much of Europe was covered in areas of dense Holm oak habitats. Since then human kind has exploited much of the forest habitat of Europe, and the Holm oak species is no exception to this. The stiff wood from oak was used as a fuel (for cooking and charcoal) and for shipbuilding. The oak apple was used in tanning and also as a fodder, which decreased the size of many Holm oak forests around Europe. Ranti is one of the few forests of its size remaining in the north east Mediterranean,and possibly all of Europe. Holm oak has been present in the Mediterranean at least sincethe Miocene era (5 million years ago), and this historical significance is just one reason why the Ranti Forest must be protected.

Centuries of ship building, charcoal production, agriculture and construction have exhausted much of the ancient landscape and today’s anthropogenic impacts are increasing stresses on this environment. It has been subjected to organized illegal felling, uncontrolled overgrazing, and forest fires. At the north and west of end of the forest there are settlements which have encroached upon its boundaries. Currently, the state controls the forest through the Forestry Service, however the resources do not belong to anyone and there is no enforced management. It would be beneficial, therefore, to protect the remaining area of Ranti to conserve this unique ecosystem for future generations.

Importance of The Ranti Forest 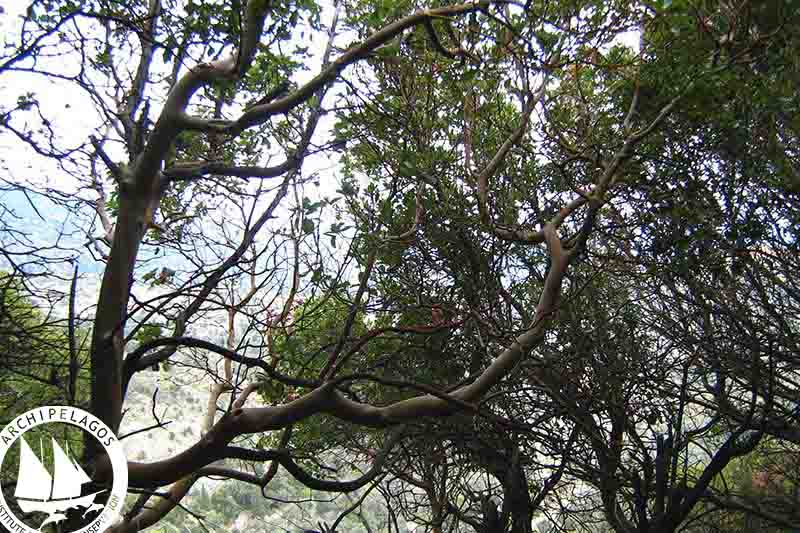 The Ranti Forest accounts for 23% of the entire forest area found on the island of Ikaria, and 94% of the Municipality of Evdilos. It is the largest un-fragmented area of Quercus ilex forest in Greece, while also being the last remaining forest, of this size and age, within the North Eastern Mediterranean. As Quercus ilex is rarely found forming forests in the Mediterranean region, and hence Ranti Forest has a great significance at an EU level.

Forest habitats used to be one of the most dominant forest habitats among the Aegean islands. Today, the Ranti forest is the only one that currently remains in its traditional natural forest form in the Aegean region. The abundance of old growth Quercus ilex trees found dotted around Ikaria island verifies the fact that the island was once covered in dense Q. ilex forest. The Ranti Forest is now the only remaining part of this once extensive woodland and still supports a large number of old trees, several of which exceed 300 years in age. Therefore, its conservation should become a recognized priority.

Evergreen forests dominated by Q. ilex, used to be one of the most extensive types of forest in the Mediterranean basin. However, in the eastern Mediterranean it has been replaced by Q. coccifera(Kermes Oak). Nowadays, Q. ilex found in Mediterranean ecosystems rarely form forestsand commonly occur as brushwood where it forms very dense growths, sheltering many herbaceous species. Therefore, these trees are rarely seen in their peak state in which they form very dense and dark woods between 12 and 15m in height.

Due to the rarity of the habitat, the Ranti Forest can produce valuable scientific information, at a national and EU level. However, the forest and its management have received little scientific attention in the eastern Mediterranean region to date.

Many flocks of goats are left to their own devices on the island and the vegetation suffers as a result. It has been documented that grazing can have positive influences in relation to increasing biodiversity. However, on Ikaria, there are estimates that 3,000 goats only graze within the boundaries of the Ranti Forest and based on the current visual evidence, it is clear that extensive irreversible damage is being done.

The mature, tall trees are not affected by grazing as much as the younger and smaller trees. Seedlings and young trees are most at risk from grazing and once eaten, they will never recover from the damage, which destroys the forest’s chance of regeneration. This implies that there is a risk that the forest will not survive for future generations. Holm Oak is not the only species at risk. The Greek strawberry tree is also at high risk from grazing, as the coarse bark appears to be a preferred grazing choice.

Wildfire is among the most dramatic threats to forests and is considered a common phenomenon for the Mediterranean ecosystems. Because of the lack of paved roads, the access for many of the forest on the Aegean islands is difficult, and there is no appropriate detection system or policies in place for fire. For these reasons fires cannot be detected easily and therefore represent a high risk for the safety of the forests and their biodiversity. Fires combined with overgrazing could be fatal to the forests because the regeneration would be impossible. 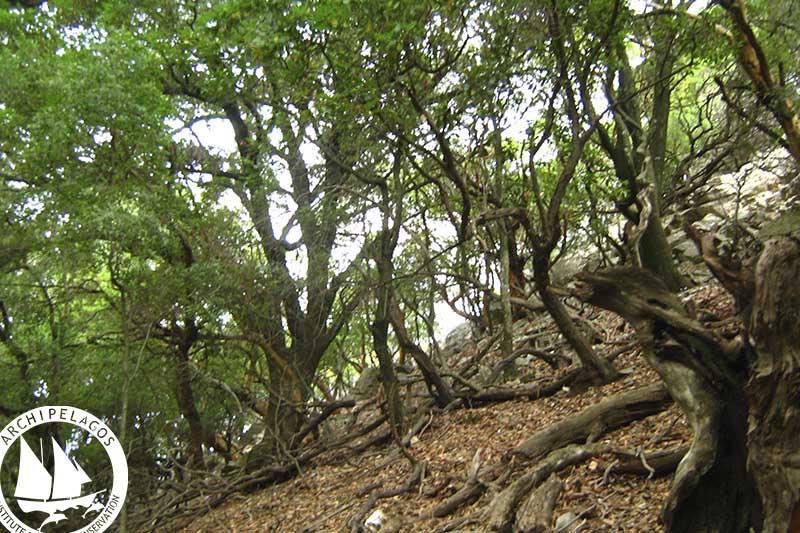 Timber has a vital importance to humans, for construction and also for heating. For many years, uncontrolled logging has taken place within local forests. The inhabitants approach accessible parts of the forest, (i.e. beside roads), and fell trees for their own personal use. The subsequent result is the annual reduction of the forest boundary. This will continue as long as uncontrolled logging persists and the habitat loss will be detrimental to many plant and animal species.

Additionally, local people are inexperienced in cutting trees and do so at the wrong stage of growth, wrong time of year and in some cases cut the wrong part of the tree. This has led to much deadwood and decay, which supports the growth of fungus. This fungus and decay have spread to surrounding healthy trees and provide an extra stress on the environment. It is an obvious statement that this kind of logging is unsustainable! The logging, mainly for firewood and timber, without a management plan and permission of the relevant authorities, is illegal. Although logging can be part of a beneficial management plan, the uncontrolled situation within the last few decades has proven to be particularly damaging to the Ranti Forest.

Many tree species can become susceptible to damage if bark is broken/ split or if they are overgrazed. Some trees are in states of rot and decay, making them very susceptible to disease. Numerous herbivorous insects can be found on Q. ilex trees within forests. Due to the imbalance of the ecosystem, many species which normally do not pose a threat (i.e. the bark beetle – Cerambyxcerdo)are greatly threatening the survival of the forest. 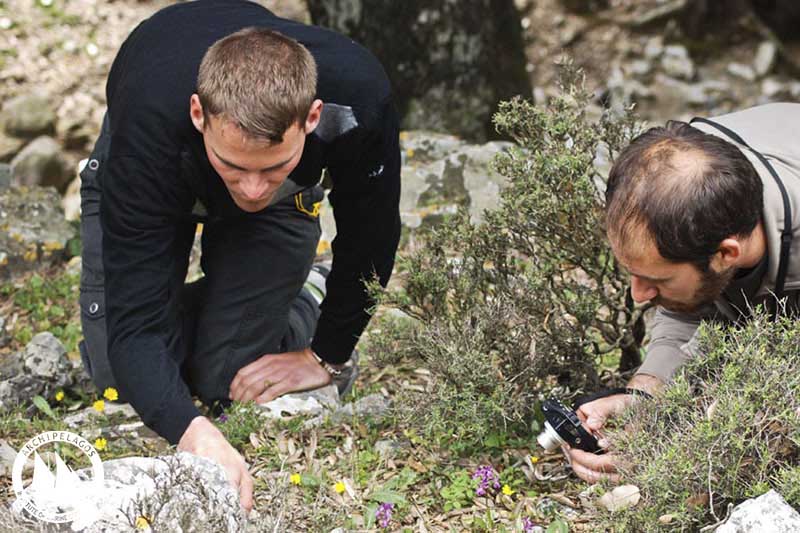 Field surveys assessing the biodiversity of forest and small islet ecosystems, as well as the factors impacting them.

Archipelagos Actions within the Ranti Forest

The Ancient Ranti Forest in Ikaria, despite its importance and uniqueness, is not governed by any protection status, management plan or protective measures. It is therefore at the mercy of uncontrolled grazing and logging, resulting in the loss of a large number of old growth trees every year. 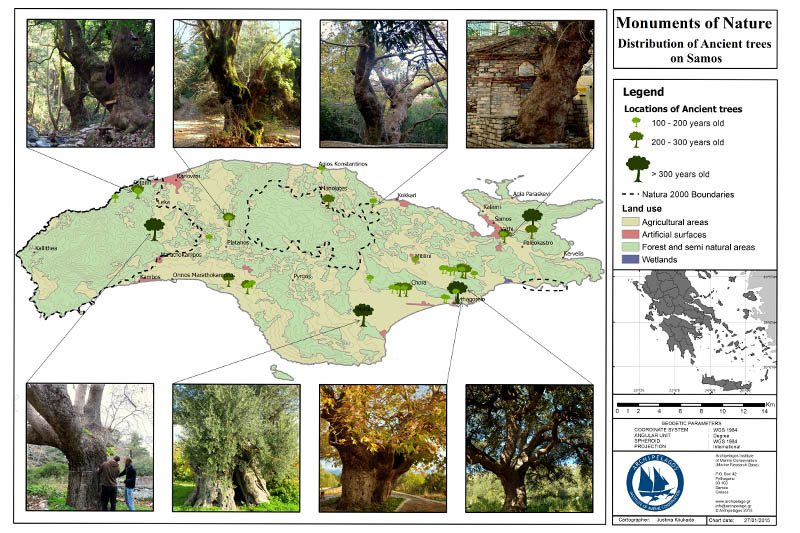 In order to put an end to the ongoing degradation and destruction of this unique Mediterranean ecosystem, Archipelagos has conducted investigations into this rare ecosystem over the past few years.