8 – 12 m (female), 16 – 18 m (male). It is the largest toothed whale in the world. Sexual dimorphism has been recorded in the species, with males weighing and measuring more than females.

The sperm whale is simply recognized by its large, trunk-shaped square head. The dorsal fin is triangular in shape, and the blowhole is situated on the left side of the dorsal area.

The population in the Mediterranean Sea is smaller than 2,500 mature individuals. Adult males are observed to swim alone or in bachelor schools, whereas females and young ones are found in social groups usually made up of 10-12 members and 1-2 calves. 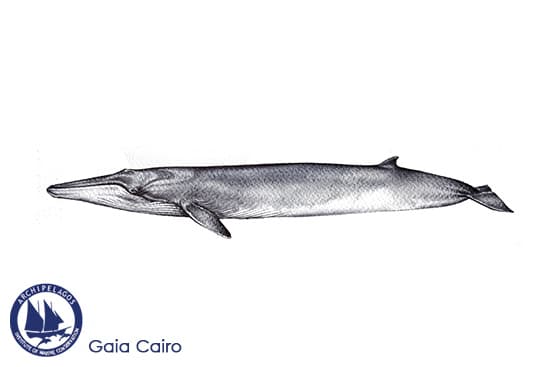 Pelagic (i.e. normally found in offshore waters) species. They migrate through deep offshore waters, continental slope and shelf waters at depths between 400 and 2,500 m. Usually it is found solitary or in small groups, but it has been known to congregate in large groups.

The fin whale has a small dorsal fin situated on the posterior third of the body and has a central blowhole with two exit orifices. The lower mandible has a characteristic asymmetric coloration – white on the right, dark on the left.

It is the only Mysticeti species in the Mediterranean Sea, regular throughout the western and central basins, but rare in the Aegean area. The population trends remain unknown. 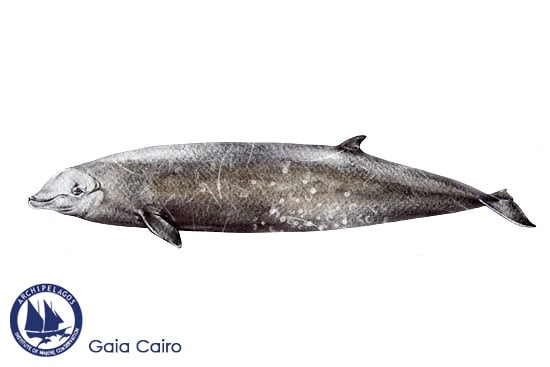 This species is difficult to observe as the individuals spend little time at the surface. They are identifiable due to their stout body, small sloping head and curved mouth, which gives them a characteristic s-shaped smile. The dorsal fin is small and situated on the posterior third of the body. The species also has a blowhole shaped like a crescent moon. Adults usually have many scars on their body. Males have two teeth that protrude out of the mouth.

Very little is known about the Cuvier’s beaked whale populations in the Mediterranean Sea overall.

Habitat degradation, noise and chemical pollution. Furthermore, a mass stranding and subsequent fatalities of this species occurred in the Ionian and Adriatic seas in 2011 and coincided with a military exercise carried out in the area.