Sharks are ecologically important to marine ecosystems as top predators and, believe it or not, their presence in the food chain maintains species diversity and abundance. Removing sharks from this chain would have complex and unpredictable implications, including a decline in important commercial species. This is because sharks prevent certain fish species from outcompeting others.

There are 47 species of sharks inhabiting the Mediterranean Sea, with over one third of them classified as threatened. Mediterranean shark stocks are considered close to being fully exploited. 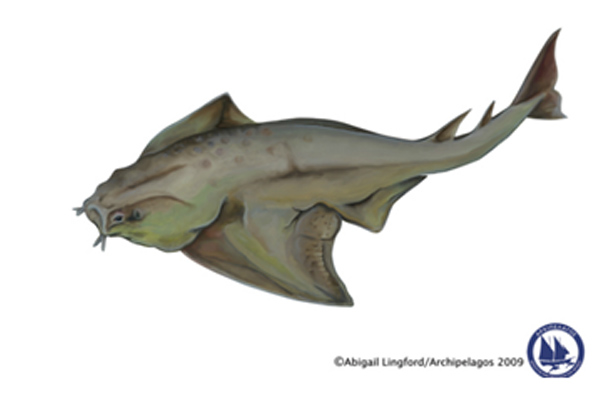 The angel shark spends its days lying buried in the mud or sand with just its eyes protruding. From this position it can ambush its prey and burst out at a startling speed to engulf flatfishes, skates, crustaceans or molluscs.

Angel sharks of the European and North African continental shelves can be found from the subtidal zone down to at least 150 m depth. They prefer mud or sandy bottom and may penetrate estuaries and brackish water.

With a flat body and large pectoral fins, the angel shark resembles a large ray more than a shark. Its skin is grey to reddish or greenish brown, scattered with small white spots and blackish dots. Young angel sharks may also have white net-like markings and large, dark blotches, while adults are plainer. Whisker-like projections near the nostrils are used to taste and feel.

Reported as common in many areas during the 19th and early 20th century. Steep population declines have now been reported from several parts of this species’ range, including in the North Sea, British coastal waters, the French coast and large areas of the Mediterranean Sea. Fragmentation of the species range has also occurred, causing populations to become isolated from one another.

Spending much time resting on the seabed, angel sharks are particularly vulnerable to bottom trawls, which have become an increasingly widespread fishing technique. Touristic developments in the shark’s range have degraded the quality of its coastal habitat. 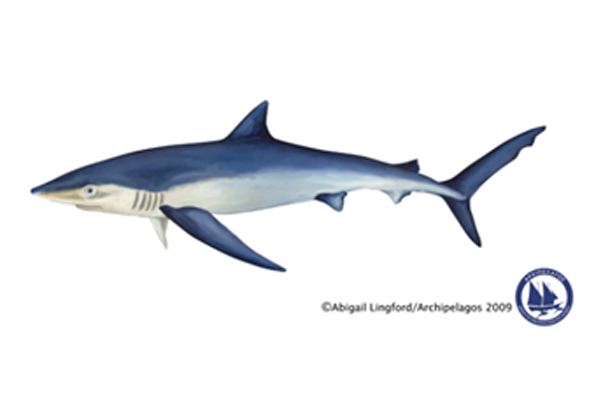 The blue shark reaches a maximum length of about 380 cm. About 50% of males in the Atlantic are sexually mature by 218 cm, although some may reach maturity being as small as 182 cm. Females are considered sub-adult from 173 to 221 cm and fully mature from 221 cm.

Blue sharks are highly migratory, with complex movement patterns and spatial structure related to reproduction and the distribution of prey. They are found in a range of habitat types throughout migration.

Blue sharks are light-bodied, with long pectoral fins. The top of the body is deep blue, lighter on the sides, and the underside is white.

Current population trend is unknown. Limited information comes from fishery assessments, which show no evidence of a declining trend in catch rates of blue sharks in the Atlantic or Indian Oceans. However, a 20% decrease was evident in the North Pacific between the periods of 1971-1982 and 1983-1993.

An estimated 20 million individuals annually are caught as bycatch from other fisheries. Blue sharks are also taken by sport fishermen, particularly in the United States, Europe and Australia. 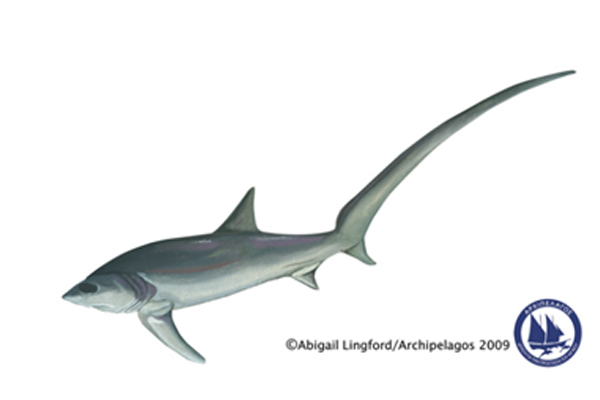 Diet consists mainly of pelagic bony fishes and cephalopods. The shark uses its tail to stun the pelagic fishes on which it feeds.

Ranges from the surface and the intertidal to at least 500 m deep (has been recorded 723 m deep). Found both in coastal waters and the high seas.

Up to half of the body length is taken by the long upper lobe of the caudal fin. The body has a deep, metallic violet to purplish brown color above and creamy white below. The shark has huge, bulbous eyes up to 10 cm across.

The species struggles to recover from moderate levels of exploitation. Occasionally targeted for its fin (2-3% of the fins auctioned in Hong Kong are from this species). Bycatch is another threat to bigeye thresher sharks, with many fishing gear types catching them accidentally. 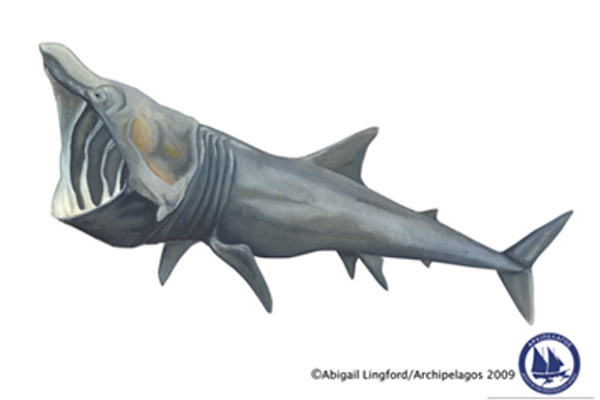 Males become sexually mature at a length of 5-7 m, females are mature at 8.1-9.8 m. There are unconfirmed measurements of individuals that reached 12.76 m.

About 50 years in theory.

Passive feeder, filtering zooplankton, small fish and invertebrates from the surface water. Basking sharks filter up to 2,000 tons of water per hour. They do not seek prey actively, but possess a large olfactory bulb which presumably guides them towards prey rich regions.

The basking shark is a coastal-pelagic animal, found worldwide in boreal to warm-temperate waters around the continental shelves and entering into brackish waters on occasions. It prefers temperatures of 8 to 14.5°C, but has been confirmed to cross much warmer waters at the equator.

Basking sharks possess a cavernous jaw, up to 1 m wide and gill slits which almost encircle the head. Colouration varies from dark brown to black on the dorsal surface and white underside.

Basking sharks have been exploited for several centuries to supply liver oil for lighting and industrial use, skin for leather and flesh for food or fishmeal. Modern fisheries yield liver oil, fins, meat and cartilage. Basking shark fins are very valuable in East Asian markets, meaning the species is often targeted for this reason, as well as caught as bycatch. 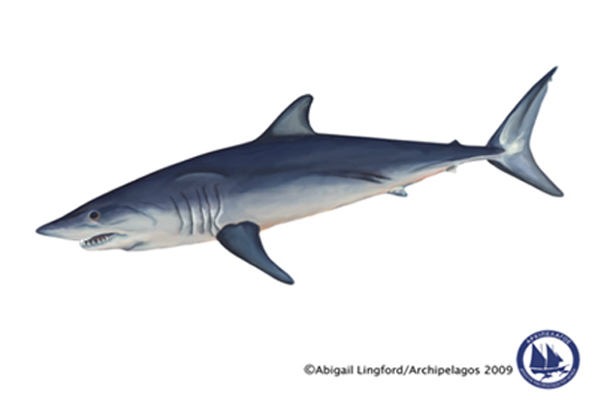 Typically between 60 and 135 kg, but individuals weighing up to 600 kg have been recorded.

Maximum age of 29 years in males and 32 years in females.

This species feeds mainly on cephalopods and bony fish, but it may also eat other sharks, porpoises, sea turtles and seabirds. It hunts by lunging vertically up and tearing off chunks of flanks and fins of its prey.

The shortfin mako inhabits temperate and tropical seas worldwide. It is a pelagic species that can be found from the surface to the depths of 150 m, normally far from land. Rarely found in water cooler than 16˚C.

Cylindrical body shape, with a vertically elongated tail. This species exhibits countershading, with brilliant metallic blue coloration dorsally and white ventrally. The juvenile mako has a clear blackish stain on the tip of the snout. Shortfin makos are also reported to have one of the biggest brains – body size ratios show the potential to learn remarkably quickly.

Shortfin mako is an important target species, a bycatch in tuna and billfish longline and driftnet fisheries. It is also targeted by recreational fishermen. 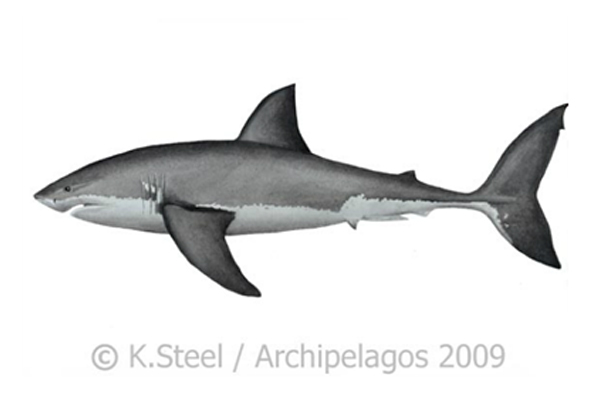 6.4 m with some records claiming lengths of 8 m.

Male great white sharks reach sexual maturity at 26 years of age, females at 33. Individuals live up to around 70 years.

Marine mammals, seabirds and large fish. Can exert a bite force of 18,216 newtons. When the shark bites, it shakes its head side-to-side, helping the teeth saw off large chunks of flesh.

Great white sharks live in almost all coastal and offshore waters which have the temperature between 12 and 24°C. Bigger concentrations are found in the United States (northeast and California), South Africa, Japan, Oceania, Chile, and the Mediterranean. Although it has been considered an entirely coastal species, individuals were found at depths of 1,200 m.

The great white shark has a robust, large, conical snout. Countershading with white underside and grey dorsal area. Great white sharks, like many other sharks, have rows of serrated teeth behind the main ones, ready to replace any that break off.

Often persecuted due to its (somewhat exaggerated) image as a threat to human safety. This negative image also makes it an over targeted species by recreational trophy fishermen. The great white falls victim to fishing gear such as gillnets, longlines and trawl nets designed to catch other species. Coastal developments and pollution degrade important nursery habitat areas. Directed fishery exploitation of great white sharks is primarily undertaken with the aim of trading their teeth and jaws as trophies and their fins for the oriental fin trade. 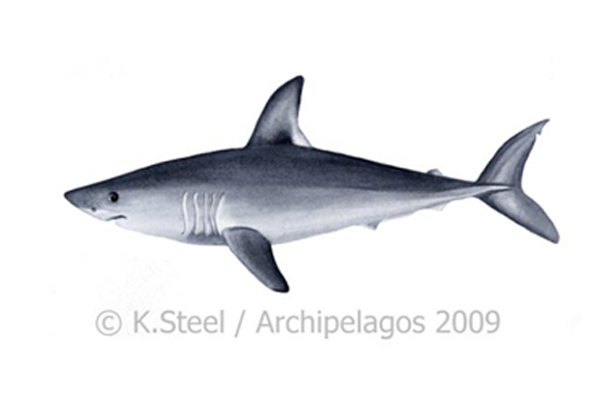 Opportunistic hunter that preys mainly on bony fishes and cephalopods throughout the water column.

Distributed widely in cold and temperate marine waters of the North Atlantic and the Southern Hemisphere.

Targeted both as a game species by recreational fishermen and for its valuable meat on larger commercial scales. Often caught as bycatch, but meat and fins are still sold even in such cases. Slow life history traits mean recovery of stocks is unlikely. 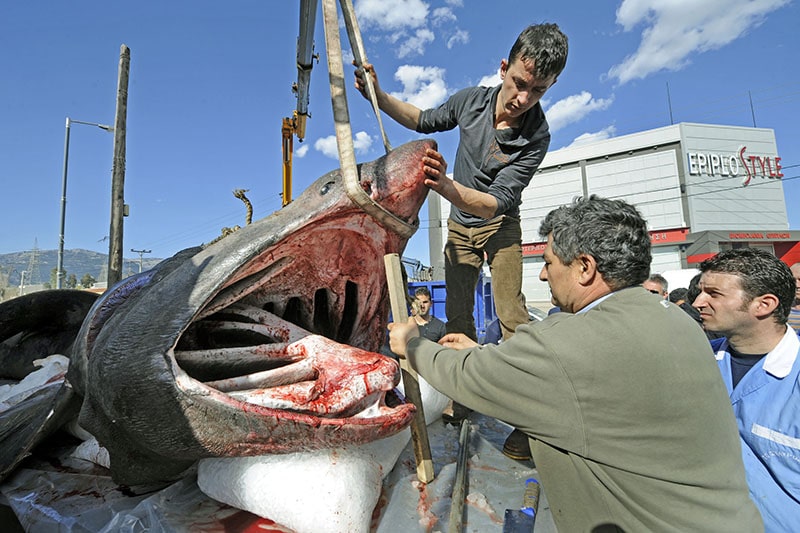 Bycatch is the main threat to the survival of shark populations in Greece. As the efficiency and efforts of trawling in the Mediterranean increase, the number of sharks affected by bycatch is increasing. Records of species landed are often inaccurate, with over 50% of bycatch unrecorded. Many species are classified under the same name, or bycatch is being returned to the sea before being recorded or used as bait, making it difficult to calculate the true extent of species decline. As a result of this, species depletion may go unnoticed for a long time, and once it is noticed, it may be too late to reverse the decline. 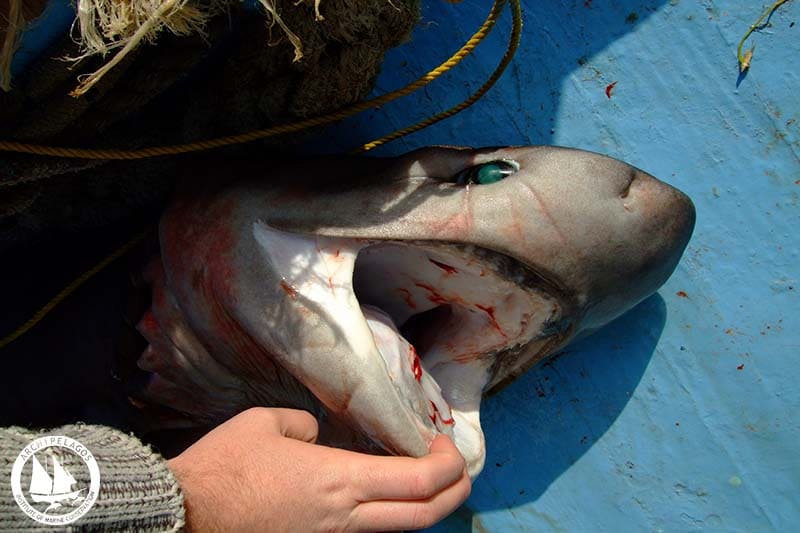 Shark fins are globally in demand and have led to the practice of shark finning: removing the valuable shark fins and then throwing the less valuable carcass overboard. Unfortunately, once sharks lose their fins they are unable to survive as they must swim continuously to prevent themselves from drowning. Demand for fins is increasing by 5% per year, leading to more sharks being caught for this purpose. A single basking shark fin once sold for nearly $10,000. 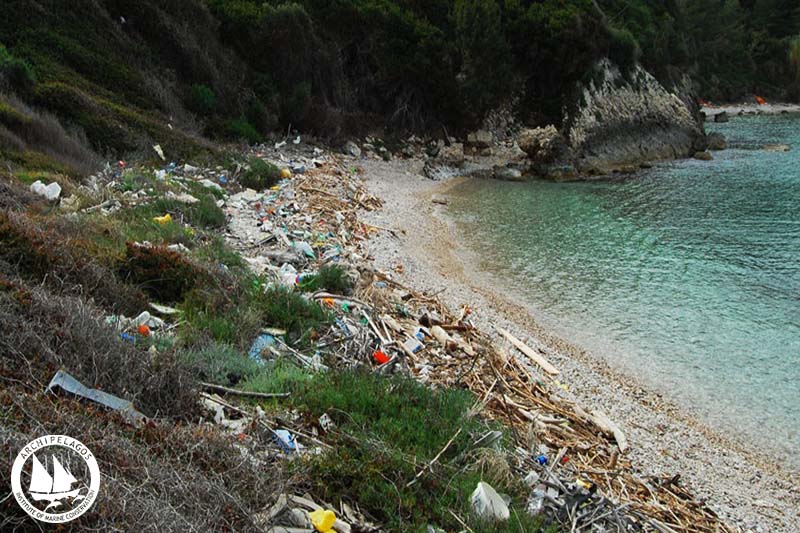 Due to increasing coastal development, human waste is washed into the water at increasingly higher concentrations. The bioaccumulation of pollutants threatens the health of sharks; heavy metals are highly toxic in animal tissues, even at low concentration. Another problem is that large amounts of plastic are dumped in the seas, causing damage to gills and fins as they tangle around them. 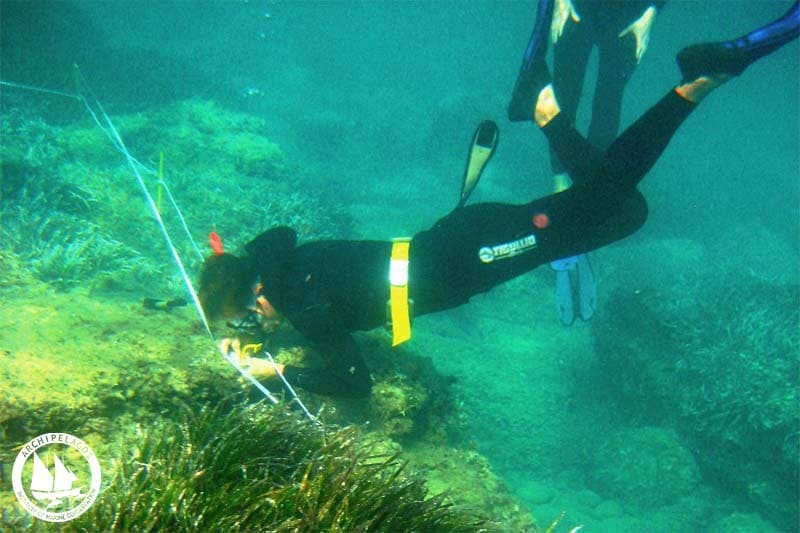 Climate change has been shown to affect prey distribution and ocean currents. This, in turn, affects the abundance and distribution of sharks, often limiting the habitats they are able to survive in. Sandbar sharks, Great white sharks and Spiny dogfish have decreased up to 90% as a result of a combination of these threats. Basking shark populations have declined by up to 70%, with an estimated 8200 left in the world. This decline is attributed to high bycatch levels through trawling, and boat collisions as a result of the large amount of time the sharks spend at the surface to feed.

Many shark species are protected in the Mediterranean, and in the Greek seas in particular, under the Bonn Convention, CITES, UNCLOS, UNFSA, the Bern Convention and the Barcelona Convention. There is also a total ban on drift netting and shark finning. Whole sharks must now be landed to encourage the use of their entire body, and the weight of the fins must not exceed 5% of the total weight of the catch. In many countries a permit system has been introduced for shark fishing.

In order to improve the current status of sharks in the Greek seas, better monitoring and landing guidelines are needed. There is a need for a management plan to be implemented, as well as public education and raised awareness in order to dispel the negative image associated with sharks.

Myth: Sharks are ferocious beasts that can take care of themselves.

Truth: Their slow growth, late maturation, lengthy pregnancy and small litters make sharks among the most biologically vulnerable animals in the world.

Myth: There are not many sharks in European waters.

Truth: There are not as many as there used to be. Overall numbers are declining with many now seriously depleted and some already locally extinct.

Myth: Shark fishing is only a problem in Asia.

Truth: Europe is home to some of the most important shark fishing countries, the most depleted shark populations in the world and most persistent demand for shark meat.

Myth: Even if shark fishing is a problem, I am powerless to help.

Truth: Public concern conveyed to law makers is the key to improving shark conservation policies in Europe and around the world; it could be the only hope!