Protecting the Forests of our Seas

The continued destruction of Posidonia seagrass meadows that takes place in the Greek seas where no efficient conservation measures are applied, does not only cause important consequences to fisheries (as fish stock productivity is reduced) and tourism (as beach erosion phenomena are caused), but also deprives us from the valuable services that these important ecosystems provide globally to limit the effects of climate change.

Seagrass meadows substantially limit the impacts of anthropogenic CO2 emissions by absorbing up to 35 times more carbon compared to tropical rainforests. However human activity over the last 50 years has resulted in loss of the Posidonia seagrass meadows in the Mediterranean, by over 34%.
For over 15 years one of the key fields of research of Archipelagos Institute has been on the Posidonia seagrass meadows, as part of a large effort aimed at their conservation. With the use of state of the art technology and in cooperation with the UNEP/MAP - SPA/RAC (The Regional Activity Centre for Specially Protected Areas of the UN Environment Programme) and the Biology Department of the University of the West of England, Bristol we produce detailed maps depicting the exact location, extent and conservation status of these important habitats. In this way we aim to contribute in covering important knowledge gaps about these important habitats in the Greek Seas.

Also, in cooperation with the School of Biological Sciences at the University of Essex, UK and with the use of logger-based systems, our research also extends to the quantification of the potential for carbon storage by seagrass meadows in the Aegean. 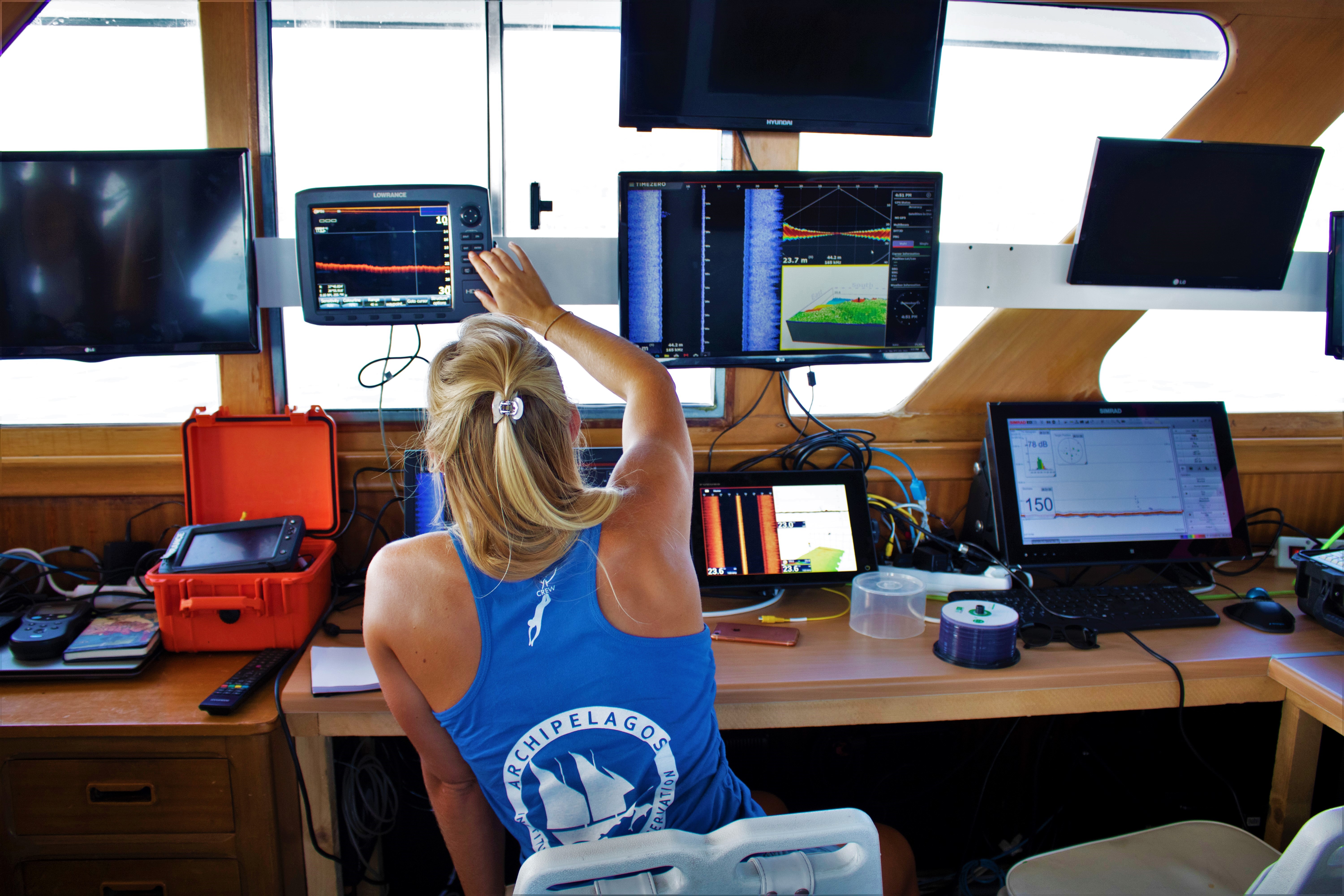 In Greece we have failed to realise the value of seagrass meadows as an irreplaceable natural resource and for years have allowed their destruction. It is now time to realise at least the financial cost that their destruction will cause to us and the future generations. 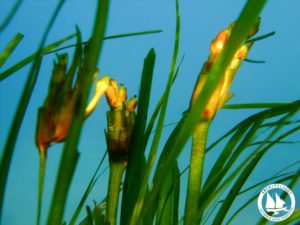 The protected Posidonia oceanica seagrass meadows, which are only found in the Mediterranean, play a crucial role as a breeding and nursery ground in coastal waters down to metres depth. Over 300 species of marine plants and 1500 species of marine animals live with Posidonia meadows, including a large number of commercially important fish species. Posidonia sea grass is a long-living and slow growing species. Meadows within the Mediterranean were recently dated to 10.000 years old- the oldest living organism on earth!

Unfortunately nowadays Posidonia meadows are decline, in same cases heading towards desertification and this is more evident in the western and central Mediterranean. Some of the largest remaining extensive Posidonia meadows of the Mediterranean can be found in the Aegean Sea waters, where they can be easily spotted on almost every coast.

It is not an alga, but actually belongs to the higher plants. It flowers every few years in the autumn time and it has distinctly green coloured flowers and plants. 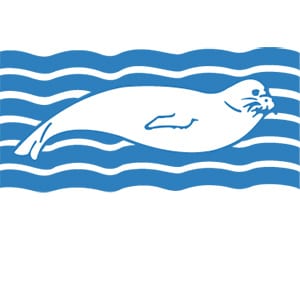 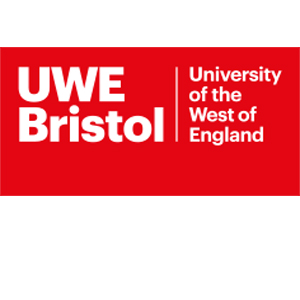 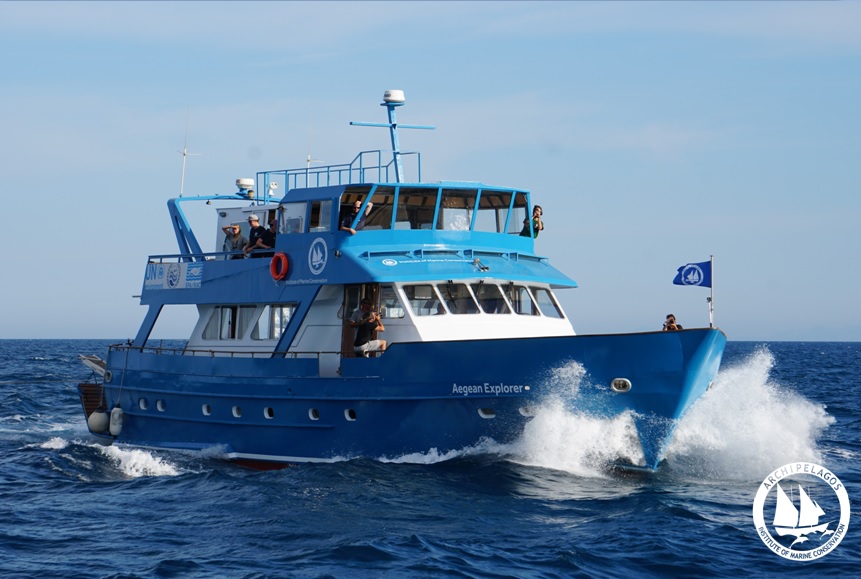 One of the key aims of Archipelagos Institute in relation to seagrass conservation, is to contribute in filling important knowledge gaps by mapping these important habitats around the Aegean Sea. This is necessary as accurate maps are the prerequisite for the implementation and enforcement of the necessary management measures.

Research is carried out with our research boat the «Aegean Explorer», which has state of the art equipment including a multibeam sonar for the 3Dimaging of marine ecosystems, a biomass scanner for the estimation of fish stock biomass, an ROV (Remotely Operated underwater Vehicle), a cartographic camera system that reaches depths up to 300m, an autonomous vehicle for habitat mapping (that can map autonomously on predefined routes/transects for > 6 hours), specially equipped kayaks for habitat mapping, underwater drones and a crane that allows for deep-water sampling.

The data collected is then combined with GIS software and compared to satellite images, in order to produce the most accurate distribution maps. This will help to establish protection measures to conserve this important species and add to the awareness-raising efforts of the Institute to inform local communities and authorities about this natural resource and Greece’s legal obligation to protect it. 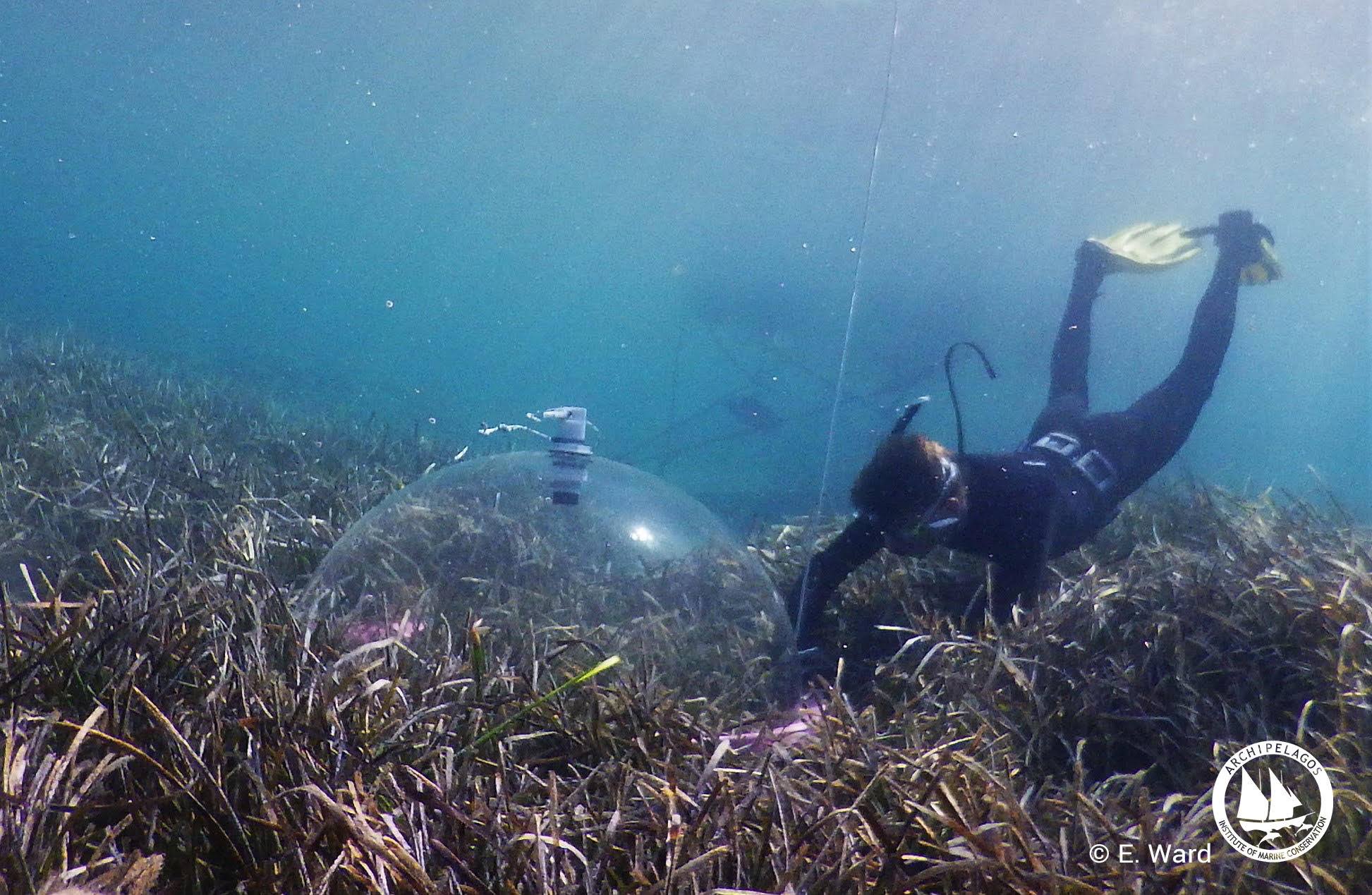 Seagrass meadows are considered a major coastal ecosystem that contribute, alongside Mangroves and tidal marshes, to ‘Blue Carbon’ storage. These coastal ecosystems sequester (capture) and store large quantities of carbon within the plants themselves and the underlying sediment layer. In fact, seagrass in some cases can be 35 times more efficient at capturing carbon than rainforests, and thus, understanding the capacity of seagrass species to store carbon is critical to future research as a possible solution to mitigate global climate change.

Archipelagos Institute have taken the initiative in Greece and are in collaboration with scientists from University of Essex, UK, to assess the extent of carbon storage for different seagrass species in the Aegean Sea. This research aims to measure oxygen production versus consumption (using underwater oxygen sensors) as an indicator for the carbon storing potential of different seagrass species, the process known as “productivity”. By assessing the productivity of Posidonia oceanica meadows in the Aegean, we can estimate the extent to which these seagrass beds contribute towards this valuable ecosystem service.

After 3 years of experimental application of different methods for the replanting of Posidonia oceanica seagrass meadows, the replanting actions currently carried out by Archipelagos aim to help seagrass meadows recover from environmental and anthropogenic damages, especially those caused by anchoring scars, with an environmental-friendly, cost-efficient and replicable technique.

During the winter months, seagrass meadows naturally suffer from the strong winds and shoots of P. oceanica are commonly found onshore and in tidal areas, while during the touristic season extensive damage is caused by the uncontrolled anchorage of recreational boats over seagrass meadows. Healthy and viable shoots are collected and maintained until they can be planted into biodegradable bags filled with sediment suitable for P. oceanica growth. A period of at least 7 days is allowed for acclimation to reduce the stress of the shoots, after which the bags are buried in the selected replanting sites. The newly planted P. oceanica patches are monitored periodically in order to determine the success of the replanting, this is done by assessing factors such as growth of the blades, epiphyte cover or presence of seagrass-associated fish and invertebrate species, among others.

Assessment of the health of the Seagrass meadows 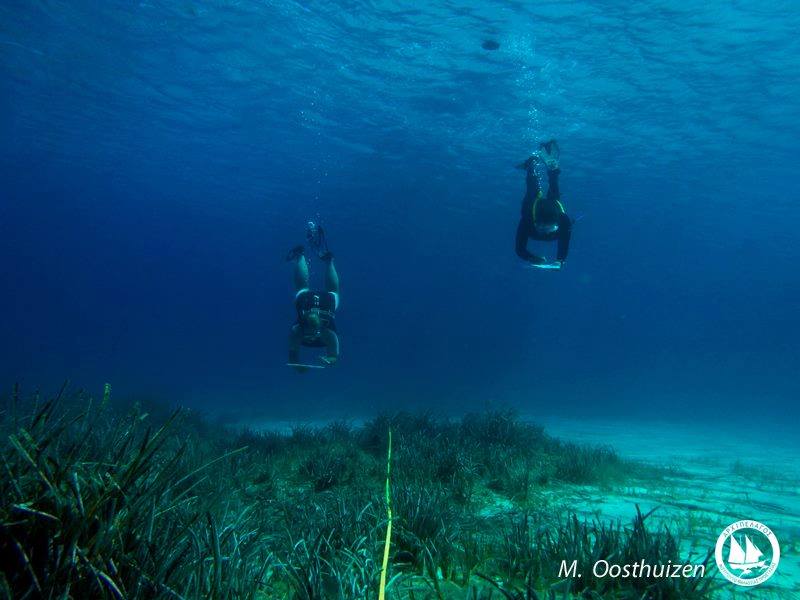 P. oceanica seagrass meadows act as ecosystem architects, creating a habitat, shelter, nursery and feeding ground for multiple organisms. The health status of a seagrass meadow can be assessed looking at various parameters: meadow patchiness, percentage cover of the seafloor, number of shoots, blade length, epiphyte cover of each leaf. Other environmental parameters such as the fish and invertebrate populations around the meadow, presence of non-native seagrass species or the levels of anthropogenic influence in the area are also important criteria to study.

For many years and in various regions of the eastern Aegean Sea, Archipelagos researchers have undertaken the study of P. oceanica heath conducting snorkel-based transects to collect the relevant data (following the Seagrass Watch protocol), as well as assessing the epiphyte cover and then comparing these parameters between native and non-native seagrass species. Understanding the status of P. oceanica meadows will help Archipelagos Institute to establish a conservation strategy and prevent the degradation of this crucial ecosystem.

Distribution of eDNA of fauna associated with Posidonia oceanica 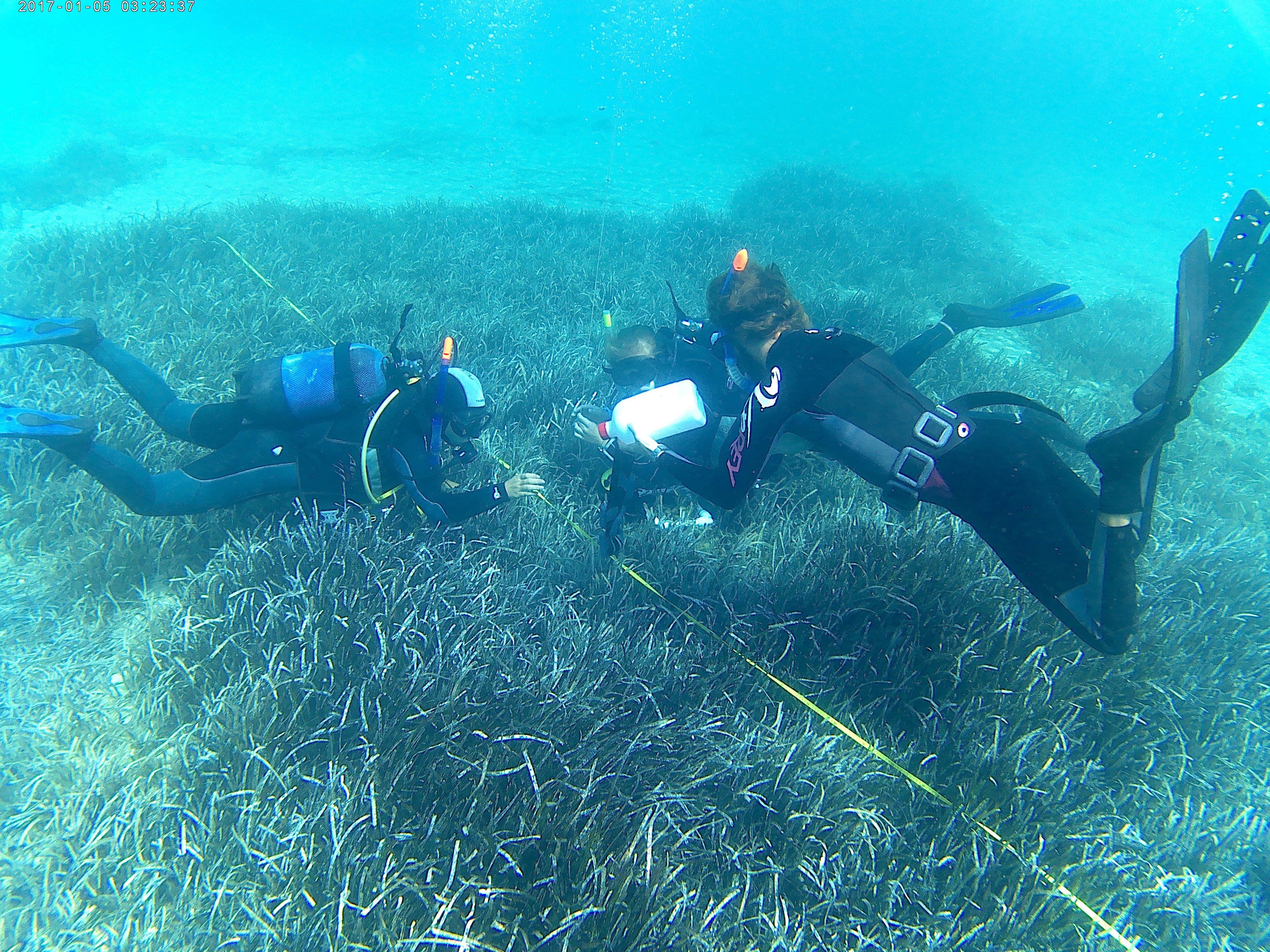 Environmental DNA (eDNA) is becoming a popular tool for assessing total biodiversity as well as monitoring certain species in aquatic ecosystems. It uses traces of DNA left behind by species such as skin cells, mucus or other excretions to confirm their presence in certain locations, thus saving surveying effort and preventing misidentifications of similar looking species. As hundreds of species may live sheltered within P. oceanica canopies; frequently visual transects are an unreliable method for monitoring their presence, therefore, eDNA could be the future of monitoring such cryptic or hidden species.

Archipelagos Institute in collaboration with the University of the West of England (UWE) has been working on developing this tool, initially focusing on macroinvertebrate species. However, with eDNA being such a new method there is still very little known about how environmental factors influence the dispersal of eDNA, therefore, a large section of the work carried out by Archipelagos and UWE has been working on improving our understanding of this interaction, using as a case study species that live fixed to the seafloor. 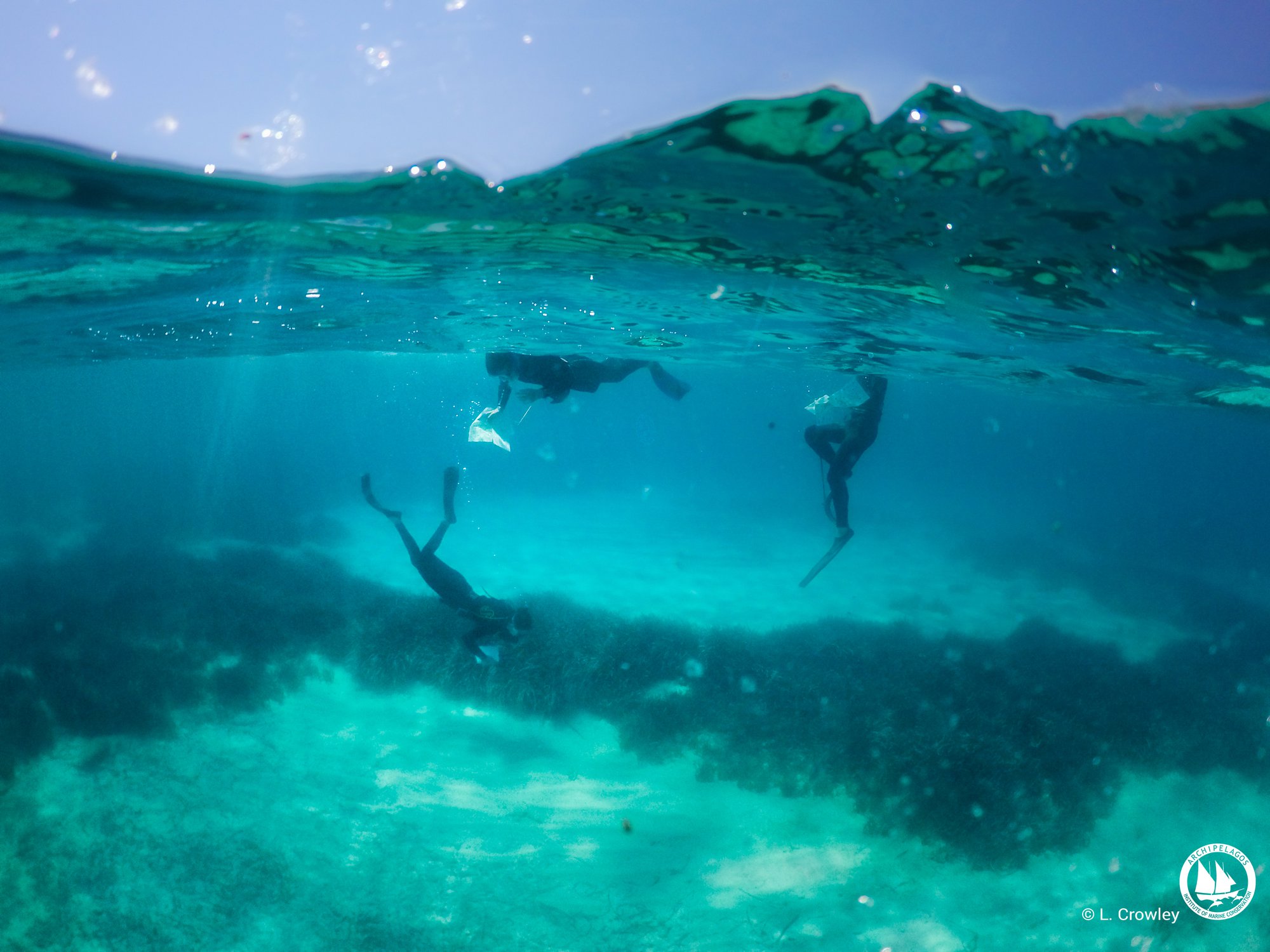 Microplastics are a global problem affecting nearly every marine ecosystem. Seagrass meadows havebeen shown to reduce the flow of water, causing sediment to drop out of the water column at a higher rate than unvegetated areas. In addition to increased sedimentation, there is less water movement within the seagrass canopy so the sediment is less likely to be disturbed once it has settled. Using this knowledge, it can be assumed that with increased sedimentation rates there is an increase in microplastic deposition within these canopies, potentially making them an important sink for plastic pollution.

Archipelagos Institute, the University of the West of England and Plymouth Marine Laboratory, UK are working together to investigate this theory by collecting sediments from within the Posidonia seagrass meadows and extracting the microplastics to assess if there is an increase when compared to bare sand. Should our theory prove that more microplastics are found within the seagrass beds, it will highlight an important, and until now, overlooked microplastic sink, which could be causing serious impacts on the species which live within seagrass meadows.

They are threatened by many factors such fishing with towed gear, anchoring, uncontrolled coastal development, pollution from intensive fish farming activities, eutrophication and more competitive invasive species.
A key threat that should be addressed is that of anchoring by large numbers of recreational boats. Each time an anchor is thrown on a sea grass meadow, damage is inficted which will take several decades to recover – if it ever recovers. Imagine the impact caused in a small bay where over 20 yachts anchor daily during the summer months.

When seagrass meadows are destroyed:

The seas become less productive and so do the local fisheries!
Nearly beaches can disappear forever! When the deep rhizone of the sea grass is not present, there is no longer a natural barrier to protect from winter storms and the local beaches erode.
TOP