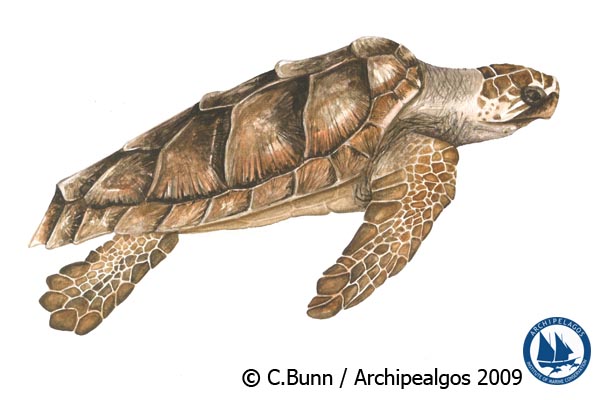 The loggerhead turtle has a brown coloration, which is darker on the central section of the shell. It is characterized by having 4 or 5 shields and 2 nails on each fin.

The exact population size of this species is unknown. Although it is the most common marine turtle within the Mediterranean, its population is declining. Key nesting sites are in Greece (the main ones are in Zakynthos, the Peloponnese and Crete), Cyprus and Turkey.

Loss or deterioration of nesting beaches, collisions with small speedboats, accidental entanglement in fishing gear, as well as ingestion of plastic and debris. In the year 2000, around 29,000 loggerhead turtles died as by-catch in the western Mediterranean. Scientists strongly recommended this species to be considered critically endangered within the Mediterranean Sea. 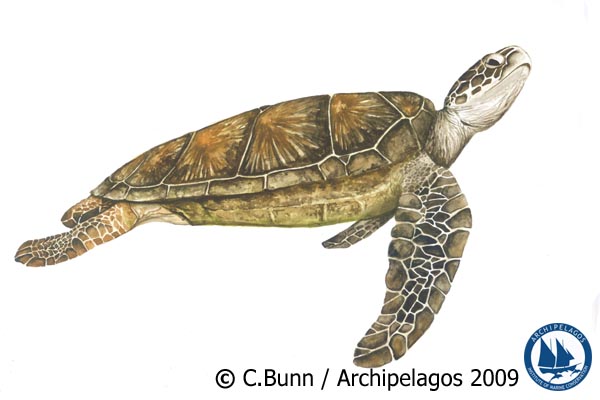 The shell and skin coloration can vary from beige to almost black. It is distinguishable from the loggerhead turtle by having a serrated mandible and just one nail on each fin.

There have been global population declines in all major ocean basins over the last three generations. In the past, commercial exploitation led to a drastic decline in Mediterranean breeding populations. Fewer than 400 nesting females remain in the area, 99% of which nest on the beaches of Cyprus, Turkey and Syria.

Loss or deterioration of nesting beaches, collisions with small speedboats, accidental entanglement in fishing gear and ingestion of plastic and debris. 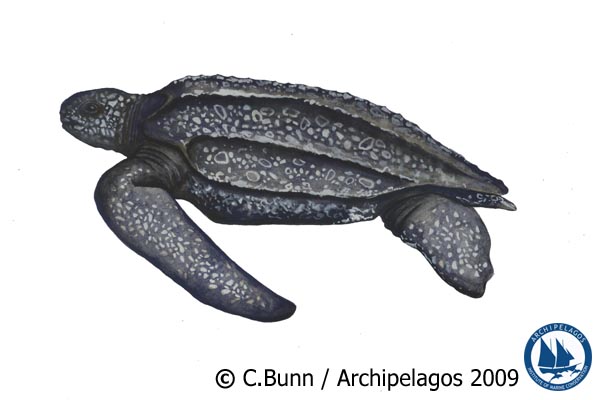 up to 3 m (the largest species of sea turtle).

Pelagic (i.e. normally found in open waters), coastal and terrestrial (only come ashore to nest). It is a highly migratory species, usually found in the open sea.

The leatherback turtle has a dark coloration, almost black, with dispersed whitish spots. The shell narrows in the subsequent part. It has no nails on its fins.

The number of adult females globally has decreased by more than 70% in less than one generation. In the mid-20th century the species almost vanished. Despite conservation efforts, recent studies have shown that only four large nesting areas remain in the world. It is occasionally found in the Mediterranean and rarely recorded in Greek waters.

Entanglement in fishing gear, harvesting of its eggs, pollution and ingestion of plastic. Furthermore, some important nesting areas are threatened by development and habitat destruction.