For decades, scientists have been studying the causes and consequences of jellyfish blooms in ecosystems. They agree that jellyfish and fisheries-based ecosystems have a complex relationship and evidence suggests that these ecosystems can reach a tipping point, shifting rapidly from being fish-dominated to jellyfish-dominated.

In simple terms, jellyfish blooms are growing – and stresses caused by human activity such as overfishing are considered to be the most likely cause. Fisheries-based ecosystems are frequently overfished, and taking too many fish out of ecosystems creates ecological space for jellyfish to thrive. 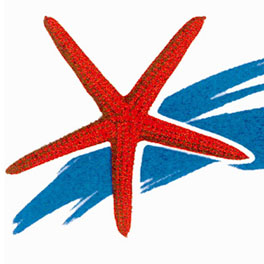 The participation in this program enables an unbiased assessment of geographic and temporal scale of mass jellyfish events, allowing time trend analysis and short term forecasting of jellyfish bloom occurence.

The active contribution of the local communities across the Mediterranean, which provide us with information on jellyfish blooms, is an invaluable asset for the success of this monitoring effort.

The Threat of Jellyfish Blooms 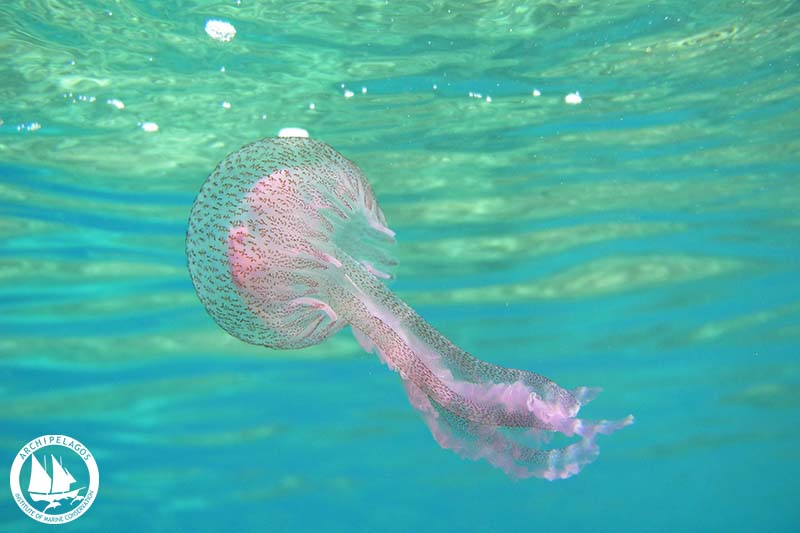 Systematically removing large predatory fish like tuna and cod, as well as overfishing crustaceans and molluscs, can lead to devastating changes. Gradually, large organisms, species diversity and structural diversity are replaced in ecosystems by more primitive species groups such as jellyfish.

The effect on the oceans – some examples

The collapse of small fish living closer to the surface, such as sardines or anchovies, can reduce predation pressure on jellyfish while increasing jellyfish food sources. This shift in the ecosystem is then amplified as the sheer numbers of jellyfish outcompete the fish by preying on the same zooplankton species.

Large marine creatures such as turtles prey upon larger jellyfish, so an increase in jellyfish abundance may seem like good news for critically endangered species like the leatherback turtle. However, turtles are one of only a few predators of larger jellyfish but are themselves at risk from overfishing and so negates any corrective effect they might have on jellyfish numbers. To make matters worse jellyfish prey upon the eggs and larvae of fish species, directly impacting on fish populations.

Trawling and other methods impacting the seabed could create improved conditions for jellyfish: removing competitors and predators from the seafloor while simultaneously leaving rocky outcrops as jellyfish refuges may give the advantage to jellyfish over fish. 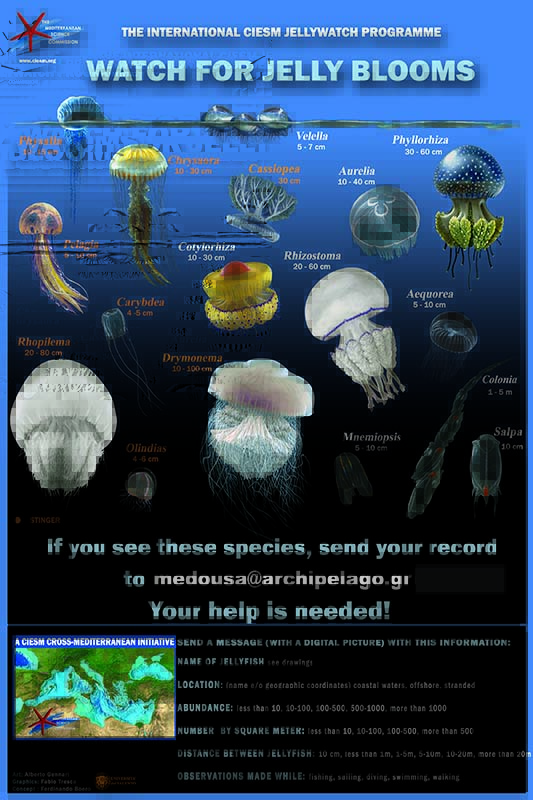 If you see one of the species mentioned above please send your records to: [email protected] or fill in the sighting form at the top of this page.

Please include the following information in your message:

(name and/or geographic coordinates, whether it is in coastal waters, offshore, stranded)

When have you observed the jellyfish

Species of Jellyfish in the Mediterranean Sea 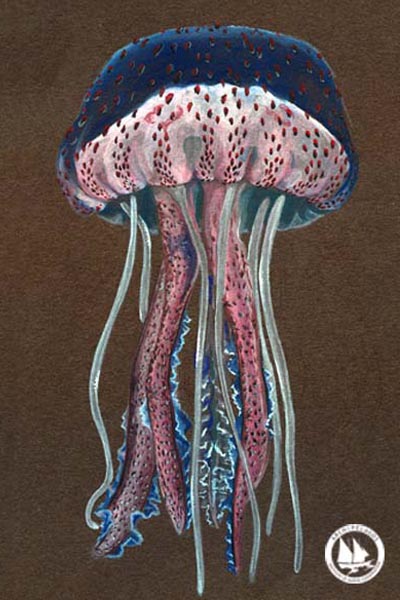 It is a small jellyfish, with a bell ranging between 6-10 cm in diameter and a wavy-edged float. It is pink to purple in colour and striped in appearance. The mauve stinger has eight tentacles and four oral arms. It has distinct tissues, but no organs, and a single body opening.

The mauve stinger is capable of delivering a strong toxin-filled thread to any organism which may accidentally come into contact with it. Although in humans such contact is not lethal, it can result in considerable discomfort. The estimated life expectancy of the mauve stinger is 2-6 months, with death usually caused by rough waters.

This jellyfish is very colourful and will phosphoresce when disturbed, leaving luminous mucous if handled. It is not known how P. noctiluca is capable of producing light, but it has been suggested that it may function as a way to communicate. The mauve stinger is capable of detecting light through the use of primitive eyes known as ocelli.

P. noctiluca inhabits the coastal environment of warm, temperate waters. The highest abundances are often found between 12 to 30 m depth.

The mauve stinger has a wide distribution and can be found in all warm and temperate waters, including the Mediterranean Sea. It actively swims in the upper layers (12 -30 m) of offshore waters. Groups of P. noctiluca can drift to coastal waters, were dense aggregations of up to 600 individuals per cubic meter can form.

P. noctiluca feeds primarily on zooplankton and fish eggs. Prey is paralyzed with nematocysts, which are immediately discharged when P. noctiluca touches a prey item. 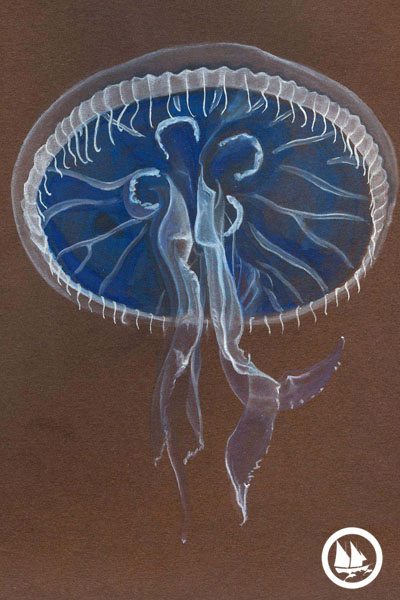 The moon jellyfish has radial symmetry of the body. It is 5-40 cm in diameter, easily recognised by its four violet gonad rings. The umbrella is flat, flexible and transparent. Marginal tentacles are small and located near the bell edge, usually several hundred are present. The four elongated oral arms are located around the mouth. They are held horizontally in younger specimens and vertically in the older ones when the length exceeds the bell radius.

The behaviour of the moon jellyfish is mostly affected by its food supply. A. aurita swims by pulsating, mainly to maintain its position in the water rather than move. It keeps its bell towards the surface to maintain the largest area available for the tentacles to catch prey.

The moon jellyfish is generally an inshore species, living within coastal waters, estuaries and bays.

A. aurita is found within the Atlantic, Pacific and Indian Oceans, including the Mediterranean and the Black Sea.

The moon jellyfish feeds mainly on a wide range of plankton, although it also ingests small fish and fish eggs. 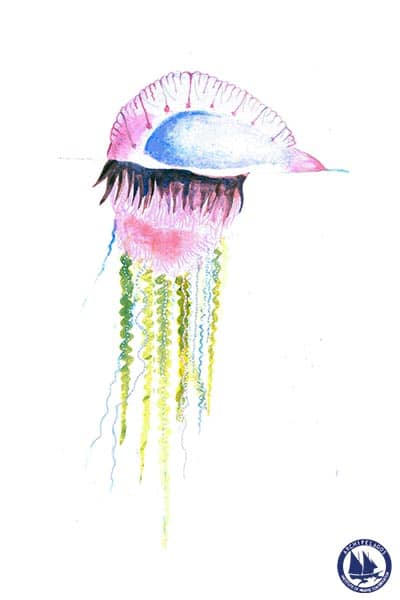 The Portuguese man o’war reaches lengths of up to 2 m, yet its tentacles may be up to 50 m in length. It is in fact a clonal colony rather than a single individual and is classified as a siphonophore (a group related to jellyfish) and not as a true jellyfish. It can be recognized by its balloon-like float, which may be blue, violet or pink and rises slightly above the water line.

Portuguese man o’wars are found floating in warm waters throughout the world's oceans. They have no independent means of propulsion and either drift on the currents or catch the wind with their pneumatophores (air sacs). To avoid threats on the surface, they can deflate their air bags and briefly submerge. They use a powerful sting to paralyse their prey.

Ocean surface in the tropical and sub-tropical areas.

Portuguese man o’wars can be found in every ocean. The drift to some regions carried by wind and currents. 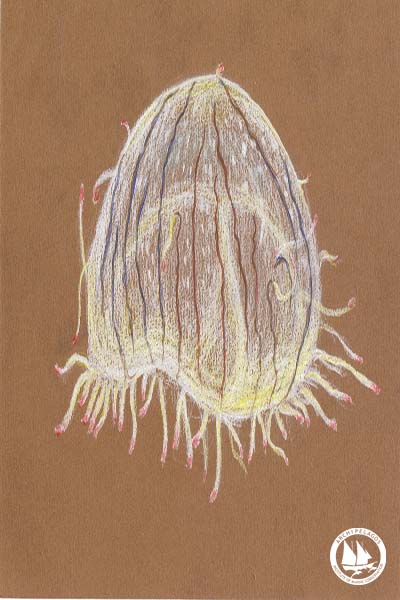 Olindas formosa is a species of jellyfish characterized by lustrous tentacles, which coil and adhere to the rim when not in use. The flower hat jelly's bell is translucent and striped with opaque bands, making it easily recognizable. This species can grow to about 15 cm in diameter. It lives circa 4–6 months.

The venom of the flower hat jelly is highly potent against the small prey it prefers. After stinging the prey, the tentacles grasp it firmly. Olindas formosa possesses a uniquely useful adaptation. When food is scarce, its body will shrink to require less sustenance. When the abundance of prey increases, the body size will do the same. 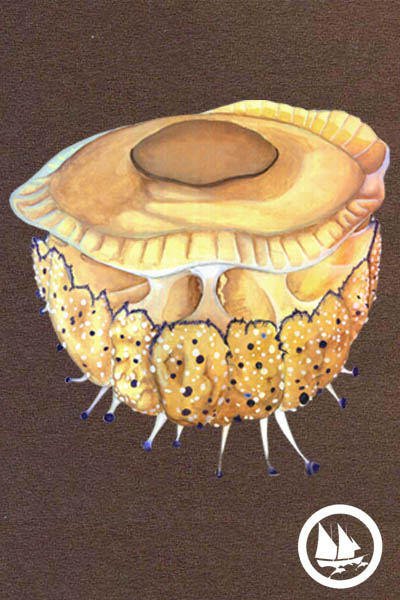 Cotylorhiza tuberculata has radial symmetry of the body. Its diameter is approximately 40 cm. The umbrella is flat, except for its centre, where a prominent formation extends from the bell. The oral arms are short and the polyps measure around 5-10 mm. The umbrella has a yellow coloration and the labial palpi are white or violet in colour.

The sting of the fried egg jellyfish has little to no effect on humans. This species primarily feeds on zooplankton and reproduces asexually. Larvae attach themselves to the ocean surface and grow in a polyp colony which looks like a stack of saucers. The tiny jellyfish are then released from capsules and drift away.

The Fried egg jellyfish lives in coastal waters and can be found between 0-7 m. 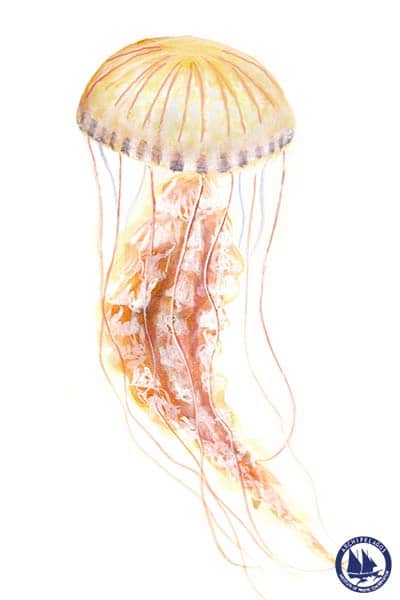 The compass jellyfish has a saucer-shaped bell, with 32 semi-circular lobes around the fringe, each one with a brown spot. Diameter is up to 30 cm. Its 24 tentacles are arranged in eight groups of three. It is usually yellowish white, with some brown.

The species is hermaphroditic, which in this case means that males become females after sperm is released. Fertilisation occurs inside the female and free swimming larvae are released into the water at the end of summer. They settle and remain as polyps until spring, when they asexually produce tiny jellyfish maturing by the following summer.

Coastal waters, usually between the depths of 0 and 30 m.

Coastal waters of the Atlantic and the Mediterranean.