The Mediterranean region has been noted to contain the sixth-largest accumulation of plastic debris on the planet, with densities of floating plastics comparable to those found in the five major sub-tropical ocean gyres, including the Great Pacific Trash Vortex. Debris in the forms of both macroplastic pieces (>5mm) and microplastic particles (<5mm) threaten the unique biodiversity of the Mediterranean sea, which hosts around 10% of all marine species despite covering less than 1% of the global ocean area. Given the ecological and socioeconomic importance of this region, plastic pollution brings serious threats to both marine and human life.

The goals of our research at Archipelagos are to identify the primary sources of micrplastics in the Aegean and to quantify the extent of their contamination.

Another priority is to evaluate to what extent plastic debris and the byproducts of their decomposition in marine ecoystems affect habitats and species, including their eventual transfer up the food chain from plankton all the way to humans.

To these ends the following studies are being undertaken:

1 - Quantifying the microplastic and macroplastic content in the gastrointestinal tracts of stranded dolphins, seals and sea turtles

One of Archipelagos’ key studies focuses on the quantification of microplastic and macroplastic content in the gastrointestinal tracts of marine mammals and sea turtles found stranded on the eastern Aegean coasts. Following dissections, the tissues are processed and the macroplastic content is assessed and quantified. Microplastic fibres and fragments are extracted and identified by microscopic analysis. The results so far are highly alarming, even in the cases where plastic ingestion is not the cause of death. Marine mammals are higher trophic level feeders and therefore their microplastic content is likely to have travelled up the food chain, which is highly pertinent to humans who are also higher level feeders.

Research focuses on the quantification of microplastic fibres across a range of fish species from various trophic levels. The main goal of this research area is to provide an indicator of microplastic transfer across the food chain, with possible implications on other marine organisms feeding on these species. Previous studies focusing on pelagic fish species found significantly high concentrations of microplastics in the stomach contents of adult fish (89% of the samples analysed were contaminated). Current research focuses on edible, commercially important fish species which may lead to important findings with possible implications on the health of local consumers.

Microplastic research is extended to marine invertebrates due to their important ecological role and the lack of studies investigating the plastic content in such organisms. Current research is focusing on the sea urchins, holothurians and bivalves, which are crucially exposed to marine debris and therefore represent important indicators of microplastic contamination.

4 - Quantifying microplastics in surface waters and the water column 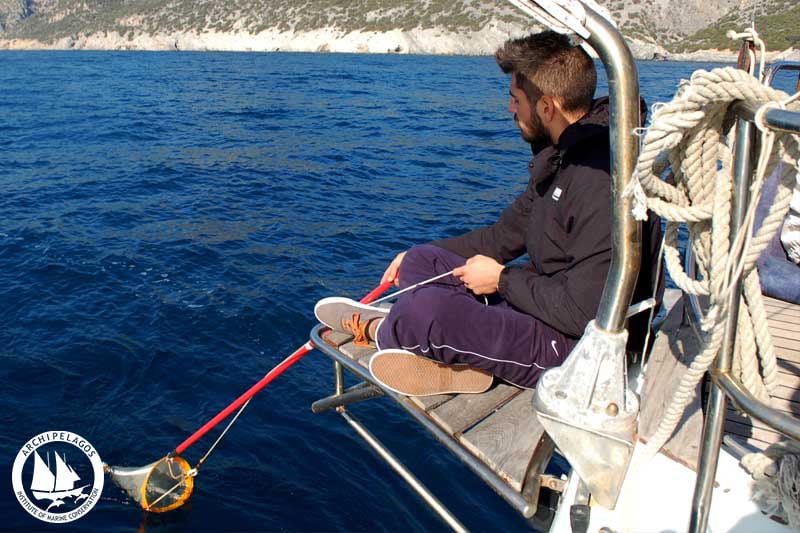 and a plankton net (200μm mesh size) to investigate microplastic concentrations in surface waters and the water column. The manta net is used to collect surface water samples from the boat out in deep waters, while the plankton net is used from kayaks to collect samples in coastal waters. The coastal water samples are collected at the surface and then at intervals of 1m depth, allowing comparisons of microplastic concentrations at different depths down the water column. All samples collected are prepared in the lab and analysed under microscope to identify the microplastics, and to measure the volume contained. This research is carried out in order to assess seasonal and special patterns in microplastic contamination in surface waters.

Archipelagos Institute started its research on microplastics in 2009 with the analysis of sediments from over 110 beaches throughout Greece, while now this research is ongoing with a current focus on the eastern Aegean area. Results are alarming as several samples from uninhabited islets of the Aegean contained similar concentrations of microplastic fibres, as those from the coasts off Athens. Marine sediments are a good indicator of temporal and special variations in microplastic contamination, as well as of the role of sea currents.

An ongoing survey is carried out to assess the daily load seasonal dynamics of macroplastics in remote beach locations. This data will help to build models of debris aggregation for the broader region of the NE Aegean Sea. After every data collection session, where all debris is analysed and cataloged into data sets to establish a pattern of macroplastics and other debris found, the beaches are cleaned and debris is removed. 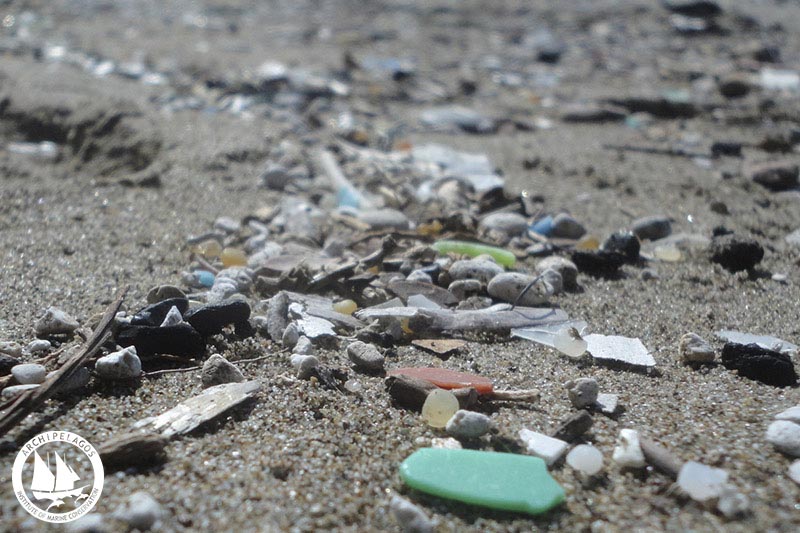 The main source of microplastics is as an indirect result of larger plastics thrown into the sea. Exposure to physical and natural processes such as sunlight, waves and wind causes the plastic debris to be broken down into smaller particles. Direct sources include products such as face and body scrubs, shampoos, deodorants, sun-screens etc. These can contain plastic microparticles made of polyethylene (PE), polypropylene (PP), polyethylene terephthalate (PET), polymethyl methacrylate (PMMA) and nylon. Another threat which is recently getting more attention is synthetic clothing; an average washing machine load (6kg) with acrylic fabrics can release more than 728 000 fibres into the sewage system.

A large volume of the microplastics and their sources mentioned above pass through wastewater treatment plants. However, their elimination is not possible with current sewage treatment technology, therefore whether the water is processed or not, all microplastics present may end up in water ways.

What Happens When Microplastics Enter the Environment?

Small pieces of plastic or fibres have been found in all marine organisms, including important commercial species of fish, mussels and crabs, many of which enter in the human food chain. The number of discovered affected organisms is expected to grow exponentially, given that until today the relevant research has been focused on only a small percentage of species. Plastics contain toxic substances themselves (flame retardants, antioxidants, softening agents etc.) and are also able to adsorb and accumulate other toxic substances found in seawater (like polychlorinated biphenyl and dichlorodiphenyltrichloroethane – PCB and DDT, respectively). In areas of intense industrial activity, unsurprisingly these levels are much higher compared to other areas. It is likely that due to their durability these small plastic particles will remain in the water for hundreds of years.

The Myth of Degradable Plastic 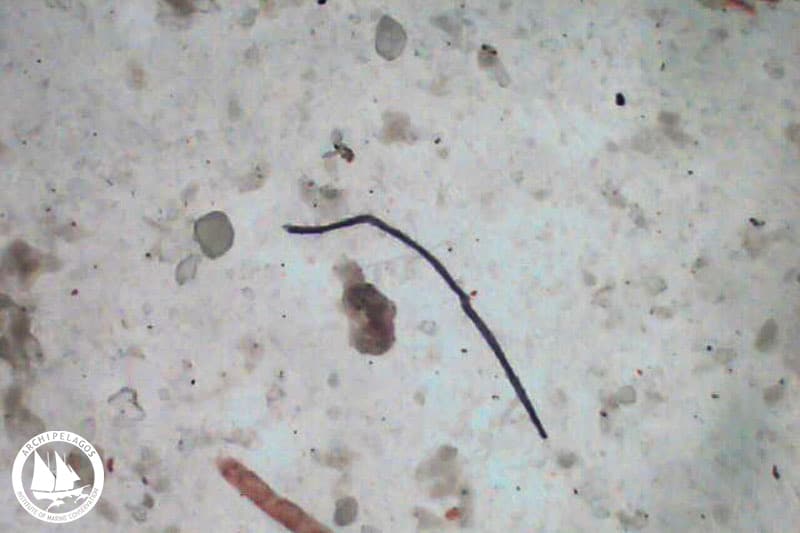 velopment of so called “bio-degradable plastics” ,also termed oxo-plastics, for food-packaging, compost and carrier bags seems to be a step in the right direction toward the avoidance of polluting plastics. However, as these oxo-plastics are still commonly fossil-based (e.g. PE, PP, PET) and use chemical additives to catalyse their degradation, their labelling as bioplastics is debatable. According to the EU Directive 94/62/EC (more specifically EN 13432) bio-degradable plastics are supposed to break down into CO2, water and minerals to at least 90% within 6 months by biological action. However, until now there has been no reliable study which proves the full degradation of oxo-plastics into organic matter within a reasonable timeframe. Therefore, it remains important for nations to establish policies to control and regulate the use and consumption of oxo-plastics as well as conventional plastics. Greece however - in contrast to other countries – has as yet to establish such policies.

How long does it really take to degrade Plastic?

Plastics vary in composition and strength and break down over different timeframes. Harsh environmental conditions accelerate the decomposition process and break plastics into smaller pieces. However it is these small pieces which will remain in the environment for hundreds of years and thus cause harm to organisms in numerous ways.

Archipelagos' partners in microplastic research are: